The new 2021 Aprilia RSV4 and RSV4 Factory have received a slightly higher displacement engine as well as updated electronics and instrumentation.Both the bikes are expected to go on sale in India soon.
By : Prashant Singh
| Updated on: 29 Apr 2021, 19:34 PM 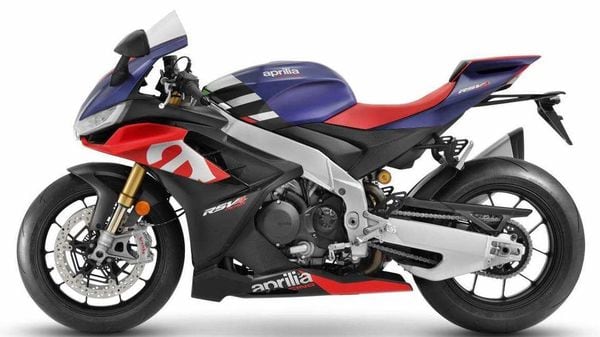 Piaggio has listed the new Aprilia RSV4, Tuono V4 and their respective Factory variants on the Indian website. The bikes were revealed for the first time earlier this year. With the addition of the new models, the company will have a complete portfolio of six motorcycles.

The new 2021 Aprilia RSV4 and the RSV4 Factory have received a slightly higher displacement engine as well as updated electronics and instrumentation. The new RSV4 has received fresh styling elements from the middleweight RS 660. The company claims that the new RSV4 model gets a more aggressive design contributing to an 'extremely low aerodynamic resistance coefficient'. One of the most prominent design updates on the superbike includes relocated winglets which are integrated onto the fairing. It also benefits from LED headlights with additional cornering lights. There are also revised ergonomics for a more 'natural and relaxed' riding position.

At the heart of the bike sits a 1099 cc motor which produces 214 bhp at 13,000 rpm and 125 Nm at 10,500rpm. Some of the updated features on the new bike include a new TFT display which is larger than before. It also features a new ECU and six-axis IMU platform. There is also a new multi-level engine brake control system, as well as six riding modes.

Its semi-faired sport-touring counterpart - Tuono V4 gets a 1077cc motor that churns out 173 bhp of power and 121 Nm of twist. It rivals the likes of the BMW S 1000XR. Both the bikes (new RSV4 and Tuono V4) are expected to go on sale in India soon.