Volkswagen has registered a growth of around 50 per cent year-on-year last month, thanks to the response it has received for its newly-launched Taigun SUV.
By : HT Auto Desk
| Written By : Sabyasachi Dasgupta
| Updated on: 02 Nov 2021, 12:00 PM 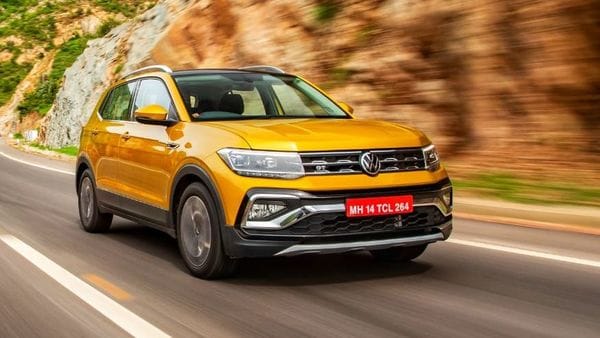 2021 Volkswagen Taigun SUV has received more than 18,000 bookings since its launch earlier this year.

Volkswagen Taigun SUV has been instrumental to the German carmaker's significant growth in the festive season this year. Volkswagen has reported a growth of around 50 per cent in October in terms of sales when compared to the same period last year.

Volkswagen has sold as many as 3,077 units of vehicles last month, compared to 2,054 units it sold in October last year. Though it may not be an even comparison to do given the effect of Covid-19 pandemic on the auto industry as a whole, Volkswagen's month-on-month sales performance has also improved significantly. Compared to 3,077 units sold in last month, Volkswagen had sold 2,563 units in September which is nearly an 18 per cent rise. In September last year, Volkswagen had sold just 2,026 units.

Volkswagen's growth is largely due to the rising popularity of its newly-launched Taigun SUV. In September, Taigun had contributed 1,461 units as part of the overall sales. Though Volkswagen has not shared Taigun's sales details for October, the carmaker confirmed it has received more than 18,000 bookings of the SUV so far since it was launched back in September.

Ashish Gupta, Brand Director at Volkswagen Passenger Cars India, said, “We are excited with the immense love and wide acceptance that the Taigun has received from all our patrons. Within the first month of launching the Taigun, we have witnessed close to 50% growth in our overall sales volume in the month of October 21 vis-a-vis the same month last year. Considering the high demand for our carlines and with the ongoing industry-wide semiconductor shortage affecting the supply situation, we are working along with our dealer partners towards prioritizing deliveries to our customers. We would like to thank our customers for their trust in the brand Volkswagen, appreciate their patience and continued patronage."