Besides concept electric cars with all the latest technological innovations, several tech companies also announced their interest to enter the EV space in future.
By : HT Auto Desk
| Updated on: 07 Jan 2022, 11:51 AM 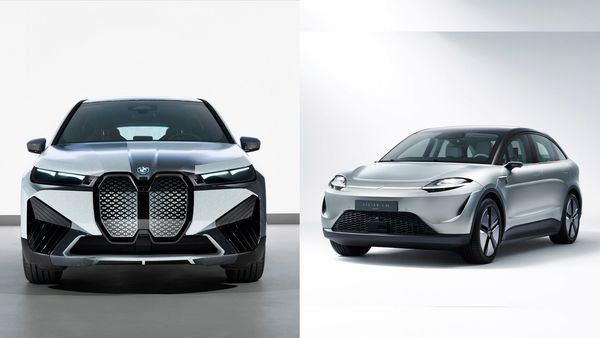 BMW iX M60 (left) and Sony Vision-S 02 (right) were some of the key electric vehicles with future technology showcased during the CES 2022.

The Consumer Electronics Show (CES) 2022 witnessed several new cars and in-car tech launched or announced this year. Despite the Covid-19 cloud hanging over the event, several car manufacturers participated digitally to showcase their new products which ranged from self-driving technology to colour-changing tech for car exterior. Here is a quick look at who offered what at the CES 2022.

Sony is reportedly planning to dive into the world of electric mobility with what well could be its first car for commercial launch ever. At CES 2022 on Tuesday, Sony showcased an electric SUV prototype called Vision-S 02. It comes with several high-tech features. The cockpit will be customisable in terms of features, complete with connected car tech and everything will also be controllable via a phone app.

Chrysler unveiled its EV concept Airflow - a fully connected car which promises 'leading-edge drive-system technology'. The Chrysler Airflow Concept, which has a claimed range of 640 kms on a single charge, will go on sale in 2025. It will come with two 150kW motors. The STLA Brain software platform will be the vehicle’s control centre and the STLA SmartCockpit will power the infotainment system and features including navigation and voice control. It is expected that the Chrysler Airflow will offer Level 3 self-driving capabilities when it finally goes into showrooms.

German auto giant Mercedes-Benz has unveiled its electric concept car Vision EQXX at the ongoing Consumer Electronics Show (CES) 2022. With a range of over 1,000 kms and an energy consumption of ten kilowatt hours per 100 kms, Mercedes-Benz promises to end range anxiety for EV owners. It also has solar cells on the roof which can trickle charge the battery on the go. The interior design is realistic like a production model, but it features a huge 8K touch screen measuring 47.5 inches.

Change colour of a car with click of a button:

BMW unveiled its electric SUV iX M60, the first M-branded electric vehicle and also the brand's most powerful EV till date with an output of 610 horsepower. However, what stole the show was the iX Flow to show off the colour changing technology. BMW's paint-change technology uses e-paper, the same feature used in e-readers like the eReaders, and is featured in a concept version called the BMW iX Flow. To make it work, the surface coating of the BMW iX Flow with E Ink contains millions of microcapsules with a diameter equivalent to the thickness of a human hair. Each of these microcapsules contains negatively charged white pigments and positively charged black pigments.

Home theatre on the move:

BMW has shown off the Theatre Screen system for its luxury cars. The 31-inch panoramic screen in the 32:9 aspect ratio and with up to 8K resolution will be made available in future cars. The screen will also integrate Amazon Fire TV platform to give passengers access to every single app they can on the move. The BMW Theatre Screen will have 5G connectivity.

Volvo and Google have announced that they would directly integrate the Google Home ecosystem. With this integration, car owners will be able to have Google Assistant-enabled home and mobile devices use voice commands to get information about their car, such as turning it on and off, adjusting temperature, and battery life. Also, one will be able to pair their Volvo cars with Google account and will be able to talk directly with Google in the car. According to Volvo, its future cars will also have Google built-in, which will also be a platform for downloading YouTube, allowing one to enjoy streaming video in the car. YouTube will be available from Qualcomm's Snapdragon Cockpit platform and will be installed in the next electric SUV, Volvo announced.