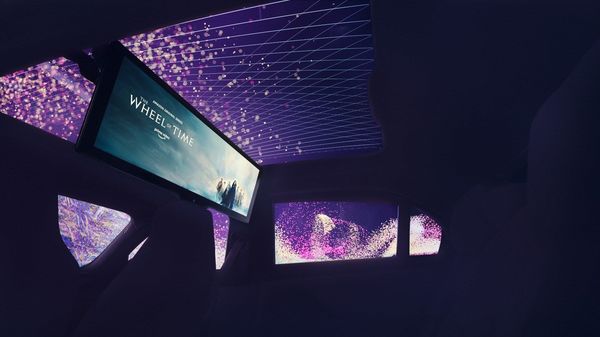 German luxury car giant BMW has showcased Theatre Screen at CES 2022, which sets a new standard for rear-seat entertainment. The BMW Theatre Screen is claimed very close to production. In that case, expect the future BMW models to come equipped with this feature.

The BMW Theatre Screen comes with a 31-inch retractable display with an 8K resolution that extends from the headliner at the press of a button. The smart display is equipped with Amazon Fire TV. This means the widescreen display will work just like the Fire TV stick that many uses at their houses.

The BMW Theatre screen comes in two different ratio formats - 16:9 and 32:9. The occupants can choose any one of them by using either the control menu in the infotainment system or using the touch control panels that are integrated into rear door handles. The widescreen is paired with Bowers & Wilkins Diamond Surround Sound system. It also gets diamond-dome tweeters. BMW claims the system is capable of providing a multifaceted sound experience.

The German luxury car brand is yet to reveal which model will receive the BMW Theatre Screen first but expect it to start being implemented later this year. Also, we might see this same feature making its way into the British luxury car marquee Rolls Royce, which is owned by BMW AG only.

In-car entertainment is finding increasing preference from automakers around the world. The luxury car brands have been experimenting a lot with these systems. Mercedes-Benz has introduced Hyperscreen technology, while several other car brands have introduced dual screen systems.