Volvo is also planning a self-driving technology, which will allow the car to fully take over driving tasks in an upcoming all-electric SUV it plans to announce later this year.
By : HT Auto Desk
| Updated on: 06 Jan 2022, 10:49 AM 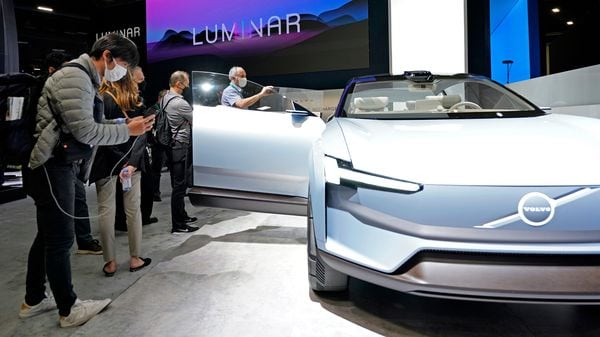 The Concept Recharge, a manifesto for Volvo Cars' future with Luminar's Iris lidar seamlessly integrated into the roofline, makes its North American debut at CES 2022 on Wednesday.

Volvo Cars has made a series of announcements at the Consumer Electronics Show (CES) 2022 which includes Google Home integration and YouTube apart from a new self-driving technology developed in collaboration with Luminar.

Volvo and Google announced that they would directly integrate the Google Home ecosystem. With this integration, car owners will be able to have Google Assistant-enabled home and mobile devices use voice commands to get information about their car, such as turning it on and off, adjusting temperature, and battery life. Also, one will be able to pair their Volvo cars with Google account and will be able to talk directly with Google in the car.

According to Google, this feature will initially be available in the US and European markets such as Sweden, Norway, Germany, Italy, France and Spain, but will soon be available in other markets as well.

According to Volvo, its future cars will also have Google built-in, which will also be a platform for downloading YouTube, allowing one to enjoy streaming video in the car. YouTube will be available from Qualcomm's Snapdragon Cockpit platform and will be installed in the next electric SUV, Volvo announced.

“Watching videos while customers are charging or waiting for their children to come out of school is part of our promise to make life happy and enjoyable. Look closely at major streaming services such as YouTube. Customers will not have to worry about charging time, but rather enjoy it, and it will be a little easier to be an EV owner, "said Henrik, Chief Product Officer of Volvo Cars. Green said in a statement.

Volvo also announced that California in US will get Ride Pilot, its subscription service for electric vehicles with capabilities of autonomous driving. The partnership with Google is part of a big plan to increase digital services and provide more entertainment to drivers.

"We are proud to announce the planned US launch of our first truly unsupervised autonomous driving feature as we seek to set a new industry standard for autonomy without compromising safety," said Mats Moberg, Head of Research and Development. from Volvo Cars.

This technology would be implemented in an upcoming all-electric SUV that Volvo plans to announce later this year. However, the autonomous driving function will be available to customers after the vehicles have already hit the road, that is until 2023.