Porsche has stopped deliveries of its vehicles in Russia due to the current war between the country and Ukraine. Porsche is present in 20 cities and has a total of 26 centres in Russia.
By : HT Auto Desk
| Updated on: 06 Mar 2022, 01:07 PM 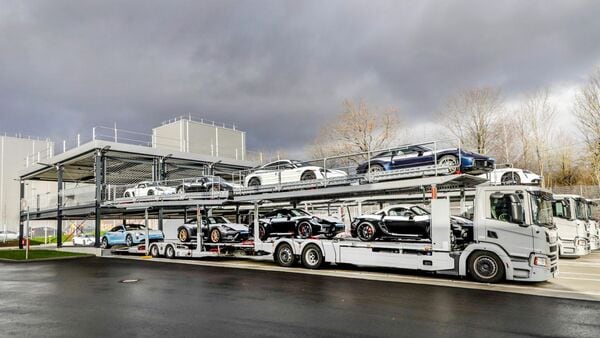 Porsche announced that it has stopped the delivery of its vehicles to Russia with immediate effect. Porsche said due to the current scenario, business activities are facing major interruptions in the country and the degree of the effect is constantly being monitored by a task force of experts. Porsche stressed safety and wellbeing of people is a priority on its list.

In Russia, Porsche has its presence in 20 cities and has a total of 26 centres. Last year, it delivered about 6,262 vehicles to the country. The automaker stated Porsche Cayenne is the most popular model in Russia as it accounts for more than 54 per cent. It has sold 3,431 Cayenne models followed by Porsche Macan with 1,413 units. In 2021, about 375 units of Porsche 911 were sold last year in Russia.

Earlier this week, top automakers such as General Motors, Volkswagen, Volvo, Harley-Davidson, Ford and Honda announced to suspend their business operations in Russia following its decision to invade Ukraine. Ford's CEO Jim Farley took to Twitter to share the situation is a threat to stability and peace. “The situation has compelled us to reassess our operation in Russia. Given the situation, we have today informed our JV partners that we are suspending our operation in Russia, effective immediately, until further notice," added Farley.

Volvo and GM were the first auto companies to suspend their operation in Russia. The latter in a statement extended its support for the people of Ukraine. Daimler Truck also declared to pause its business activities in Russia and is also reassessing its collaboration with Russian truck maker Kamaz. Mercedes-Benz group is reportedly thinking to divest its 15 per cent stake in Kamaz as early as possible.