Toyota recalls more than 2,000 units of its all-electric bZ4X SUV. Here's why

Toyota issued a global recall of its first electric vehicle, the Toyota bZ4X SUV, due to the risk of the wheels getting loose.
By : HT Auto Desk
| Updated on: 24 Jun 2022, 08:33 AM 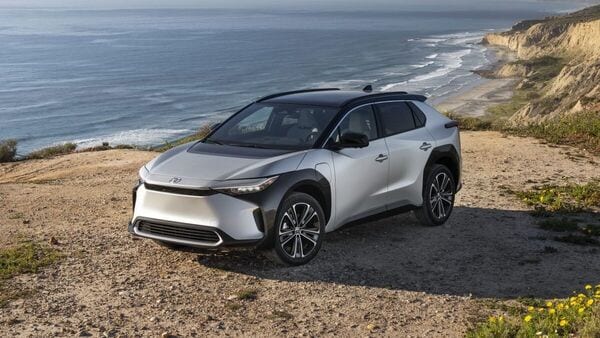 Toyota Motor Corp announced that it has issued a global recall of around 2,700 units of its first electric vehicle, the Toyota bZ4X SUV, due to the risk of the wheels getting loose. According to a report by Reuters, Toyota has submitted the recall of the bZ4X SUVs to Japan's transportation ministry. The world's largest automaker said out of the 2,700 EVs, 2,200 units of the Toyota bZ4X have been noted for Europe while 260 units for the United States followed by 10 units for Canada and 110 units for Japan.

Toyota, reportedly, has asked owners of the all-electric bZ4X SUV to not drive the electric car until it concludes its investigation. Many units of this newly launched electric vehicle have not been delivered yet. Toyota issued a statement apologising for the inconvenience that has been caused due to this issue found in the EVs. “We would have repaired it as soon as possible, but we are investigating the details," said the automaker in the report.

Toyota launched its first all-electric bZ4X SUV in April this year. The electric car promises a range of 559 km. It is based on Toyota's e-TNGA platform. The EV offers two trims, one with a single motor that is capable of generating 201bhp and the other comes with a twin motor set up, that is able to churn power up to 215bhp. The Toyota bZ4X electric SUV rival the likes of the Hyundai Ioniq 5 and Kia EV6. When launched, Toyota expected to sell around 5,000 units of the electric vehicle. Though Toyota's entry into the EV space has been a little late than its competitors, this recall might dampen the automaker's sales goals for now.

A recent report also stated that Toyota is considering developing a performance version of the bZ4X electric vehicle, however, the automaker has not confirmed anything yet. Daisuke Ido, the chief engineer of the Toyota bZ4X EV stated in the report, “We are talking with the GR guys, but it's still not a concrete idea yet." Toyota showcased a bZ4X GR Sport concept vehicle at the Tokyo Auto Salon in January this year.