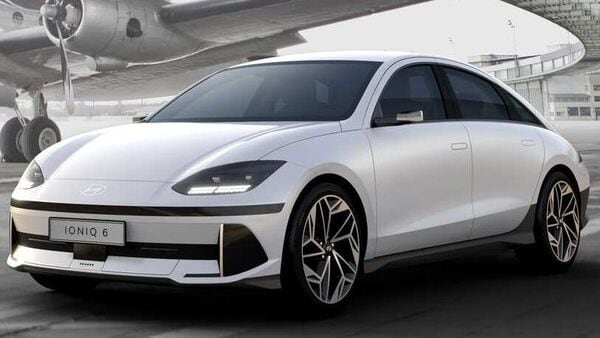 Hyundai Ioniq 6 has finally debuted with a unique look. Staying true to the Hyundai Prophecy concept, the Ioniq 6 appears as a suave and curvy-looking futuristic electric car that appears with a visual resemblance to the Volkswagen Beetle. The automaker has also revealed the interior of the Ioniq 6 electric sedan. However, no technical information has been revealed so far and the carmaker will disclose those details on July 14.

Hyundai dubs the Ioniq 6 as an electrified streamliner. The car comes with an arched shape that gives it an appearance like the car could guide through the air. This would certainly help in aerodynamic efficiency, but Hyundai is yet to reveal the drag coefficiency data of this EV.

The front profile of the Ioniq 6 looks clean and comes with a minimalist approach. It gets a vertical part on each side of the lower front fascia. A smooth hood and raised headlamps leading to the A-pillars are other design elements along with an arching beltline that accentuates the roof. The lower side profile comes with some subtle sculpting on the doors. Also, the car gets rear-facing sleek cameras instead of mirrors. The car runs on complex asymmetrical spoked wheels. Moving to the back, it gets a spoiler adding sportiness. There is another ducktail spoiler below that. The LED taillights come with a full-width appearance and they sport square pixelated elements. Overall, the exterior of the Hyundai Ioniq 6 looks like a perfect blend between retro theme and modern styling.

Inside the cabin, the Ioniq 6 gets separate screens for the digital instrument cluster and infotainment system but they share a single bezel. The dashboard arches upward to create space for the display, which shows the side camera video feed. Also, there is a range of capacitive buttons for operating the HVAC system.

The steering wheel gets multifunction buttons and four square lights. It is not revealed what are their functionalities. The cabin gets ambient lighting on the dashboard, lower door panel and at other places. They can change colours.

The Hyundai Ioniq 6 rides on the E-GMP architecture that also underpins the Ioniq 5 and Kia EV6. The electric sedan would get a 77.4 kWh battery pack, and dual electric motors. Expect this EV to churn out an output of around 300 hp power.