The MotoE project is a historic step for Ducati that is only starting its journey in the electric sport bike segment.
By : HT Auto Desk
| Written By : Prashant Singh
| Updated on: 20 Apr 2022, 01:07 PM 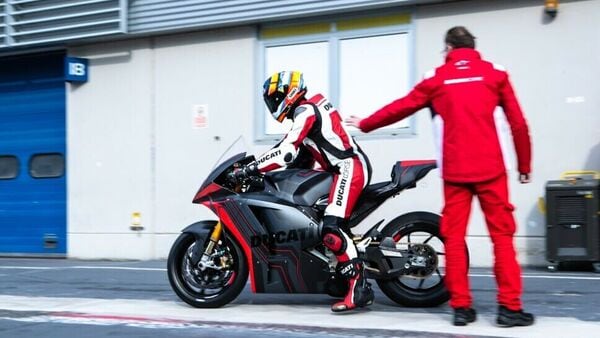 The latest video shows the bike being tested to the limits around Italy's popular Vallelunga track.

Ducati has rolled out a new video of its fully electric motorbike - MotoE which is officially christened as the V21L, being ridden around the Vallelunga track in Italy. The company signed a formal contract with Dorna in 2021 as the sole official supplier of electric motorcycles for the FIM Enel MotoE World Cup.

The latest video shows the bike being tested to the limits around Italy's popular Vallelunga track. The company has also announced former MotoE rider and ex-MotoGP star Alex de Angelis as one of the test riders for the project. These new developments come in addition to Michele Pirro, who was the first person to ride the bike when it was officially announced back in 2021.

As per Ducati, the development of its new electric sport bike is a ‘historic step’ that will churn out ‘technologies and solutions’ for the world of electric sports bikes in the days to come. “Ever since we took the Ducati MotoE prototype to the track for the first time, development work on the project has never stopped, not even for a moment," said Roberto Canè, the eMobility Director for Ducati.

Canè continued, “The hard work of the whole team is paying off for the efforts made through continuous progress, which is giving us great satisfaction. In just four months, our prototype has already tackled the curves of some of the main Italian circuits, providing positive responses. There is still a lot of work to do, but the direction is certainly the right one".

The MotoE project is a historic step for the Panigale-maker that is only starting to make its presence felt in the era of electric bikes. Over the next few months, Ducati will roll out further information on the technical evolution of its electric sport bike.