The cost of operating an EV as a taxi is being realized increasingly by owners.With range improvements and more affordable buying costs of EVs as a whole, such vehicles are fast becoming a common sight as taxis.
By : HT Auto Desk
| Updated on: 02 Apr 2021, 17:20 PM 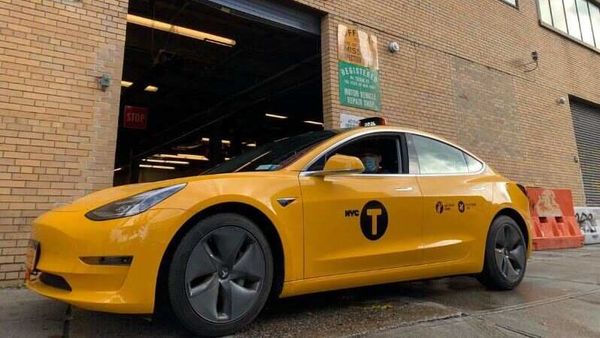 This photo was originally tweeted by @TeslaNY.

For anyone who has ever been to the city of New York, the sight of yellow cabs criss-crossing roads here simply won't have gone unnoticed. And many of even those who may not have been here are likely to have heard of how much these cabs mean for transport options of locals and tourists alike. In a world fast embracing electric mobility though, the shade of yellow is now flowing freely over Tesla cars as well with more and more units joining the taxi service.

A large part of the reason for fleet operators and taxi drivers choosing Tesla models could possibly be because how much savings are possible if driving around in a battery-powered vehicle. The Model 3, which is fast becoming a common sight as a taxi in New York City, is also comparatively affordable which means the upfront cost of this vehicle isn't much of a deterrent either.

Many fleet operators have reportedly also installed their own charging points to power the Tesla vehicles in operation. And with per-charge range of EVs constantly increasing, thanks to advancements in technology, battery power is likely to become even more popular.

While a few other cities in the world are also considering electric vehicles as taxi options for the masses, New York still has a long way to go before taxis with conventional engines are positively outnumbered by battery-powered vehicles. And if Tesla CEO Elon Musk brings plans of an even cheaper EV - one that costs less than the Model 3 - to production lines soon, it could well further speed up the process of such cars in public transport service.