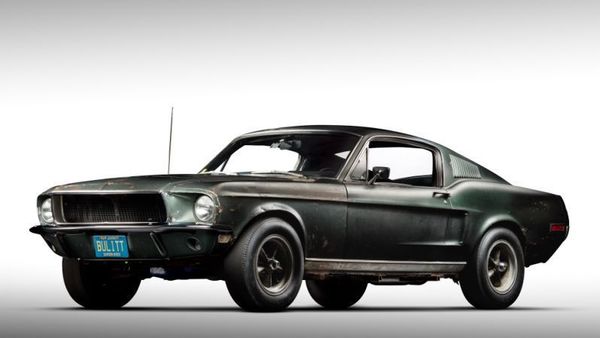 So says Sean Kiernan, owner of the 1968 Ford Bullitt Mustang that could become the most expensive Mustang ever sold when it hits the auction block in January. Kiernan is referring to the grueling and delicate process of selling such a well-known car, the one his dad, Robert, bought in 1974 and used as a family car until 1980. Kiernan the elder passed away in 2014; Kiernan the younger kept the car sitting in the family garage until confirming its presence publicly last year.

Famed as the hero car in arguably the greatest car chase scene in film history—Steve McQueen raced it for 10 minutes through the streets of San Francisco in the 1968 thriller Bullitt—the unrestored Mustang fastback in Highland Green will go on sale at no reserve in the Mecum auction on Jan. 10 in Kissimmee, Fla. The move to hold a no-reserve sale is highly unusual for such a car, which is expected to take as much as $5 million. Typically cars of that caliber are offered with a minimum amount the owner would like to receive for them, or take them back home. But the prospect of having to renegotiate everything for a second sale seemed too daunting to consider for Kiernan, whatever the price.

“I knew with ‘no reserve’ we would scare a lot of people by doing that," Kiernan says. “But ‘all in’ is what my dad would do, and we always hated watching auctions where there are reserves. The excitement is still there, but in the back of your head you’re thinking you might have to do it all over again. I’m not doing this again."

To say the last year has been hectic would be an understatement. Kiernan made 10 stops worldwide from Goodwood to San Francisco to show the V8 coupe, all the while running a horse farm in Nashville, maintaining his job at LKQ auto parts, and preparing for a new baby with his wife, Sam.

The bigger surprise to the sale, which will be held and televised live on NBCSN, is the fact that Bullitt will be sold by Mecum at all. Where more-prestigious auction houses like RM Sotheby’s, Bonhams, and Gooding & Co. could have reasonably expected to receive Kiernan’s business, Mecum—known for selling high volumes of four- and five-figure cars rather than the pedigreed seven-figure lots Bullitt will likely emulate—won the bid. It’s quite the coup in the highly competitive auction industry, where houses vie to earn the most famous cars and top-price sales.

The move has led to some speculation about why Kiernan would not trust his prized possession to one of the more premier names, even despite the RM Sotheby’s bungle last summer. But while Mecum isn’t typically a headline maker, it attracts a down-home audience more likely to appreciate the roughed-up Mustang, which retains marks from movie camera mounts and repairmen’s Bondo quick fixes, more than the pristine blue bloods like the Ferrari 250 Spiders that frequent Gooding sales.

“Auction companies are for-profit businesses—they are in the business of matching the right cars to the right buyers," says Hagerty’s Jonathan Klinger. “There is still a very active portion of car culture that think of Steve McQueen as the ultimate car guy, and that is the older side of the demographic, which is likely to be at a Mecum sale."

Mecum has made Bullitt its star car, running it with Kiernan himself on a multi-location promotional tour that started concurrent with the car’s 50th anniversary and building a special website just to promote it. The company is also successful in its own right: During the January sales for 2018, Mecum sold 2,208 vehicles for overall sales totals of nearly $97 million. That by far beats the same stats, respectively, of the auctions held by Bonhams, Gooding, and RM Sotheby’s in Scottsdale, Ariz., a week later.

“We are very confident that there will be numerous people interested in the car, and given that is the case, we will be letting the auction format do what auctions were designed to do, which is show what the public is willing to pay for it," says Sam Murtaugh, Mecum’s vice president of marketing. “We are very confident."

Kiernan says he considered the “romance" of the car when considering the Mecum proposition: “Dana Mecum was the guy my dad would sit down with at the end of the day and have a beer with—the guy bleeds red, white, and blue. I knew he would be the one to best tell the story of the car." But he is no naif. He also attended virtually every major car auction of the past two years and “took notes" about how they were conducted. He evaluated how many people would be in the room during the sale, who would be in the room, and even what time of day the car would hit the auction block. All are factors that can influence how well a car sells—or doesn’t sell at all.

“I wanted to see how the auction houses ran the rooms, whether it was the debacle with the German Porsche or something else," Kiernan said. “I needed to be able to see this out my way, at the end." (Kiernan was alluding to the Type 64 car RM Sotheby’s infamously listed for $20 million but which failed to sell after the auctioneer apparently mispronounced the starting bid. It was the biggest bungle in memorable auction history.)

Kiernan also negotiated ample freedom to run the sale how he wants. Along with his sister, Kelly, he will drive the car up on the auction block himself; he set the no-reserve terms; and he got auctioneer Matt Moravec to agree to start bidding at what will be an unusually low price. (Robert Kiernan purchased the car for $3,500; its two previous owners, Robert Ross and Frank Marranca, each paid $3,500 for it as well.)

Murtaugh, on avoiding any errors on a potentially record-shattering sale: “It’s a true no-reserve auction. Whatever the bidding does the bidding does. And of course we are making sure that our IT team makes sure the numbers on the screen match what is coming out of the auctioneer’s mouth."

Bullitt is effectively a one-of-one example touched with the golden blessing of car culture’s most important god; it has transcended into pop culture with few direct comparisons from which to predict a sale price. Which means that how much it actually sells for next month is anyone’s guess. Dana Mecum has said Bullitt will sell for at least $3 million; a recent Hagerty magazine article said it will be at least $4 million; Klinger himself said he expects it could take nearer to $5 million.

“A movie car always has a multiple applied to it," says Murtaugh. “When you add the Steve McQueen factor, that multiple effect goes up exponentially. It varies depending on the item whether it’s a motorcycle or a car he used to own, but with Bullitt being in a movie and driven by McQueen, you’ve got a double-multiple going on, and with McQueen it has always been a multiplier of 10x or 15x."

As for the Mustang distinction itself, there is also a million-dollar precedent: Earlier this year, Mecum set the record for a Mustang-based car when it got $2.2 million for a 1967 Shelby GT500 Super Snake. That one happened in Kissimmee—the same place Bullitt will be on Jan. 10.

Kiernan will be happy to see it go, strange as it sounds. He’s a bona fide car guy—but he’s no hoarder.

Selling Bullitt, in fact, has been “therapeutic," he says. Kiernan waited for years to sell it while he dealt with the grief over losing his father, whom he described as his best friend, and then waited months longer until he came to terms with the fact that the reason he kept the car was for emotional value: “It made me feel close to my father … but what I started to figure out last year was the car controlling me."

Now, he says, the final sale of Bullitt will bring closure—and freedom. He’s got a few other cars calling his name.

“My dad had other cars that I want to put together, cars that meant more to me, believe it or not," Kiernan says. “There was a 1975 Porsche 911 that sat next to it for years. That is going to be my next project."