The Mahindra ALSV is a light armoured specialist vehicle built for use by military and defence forces.
By : Sabyasachi Dasgupta
| Updated on: 30 May 2020, 12:39 PM 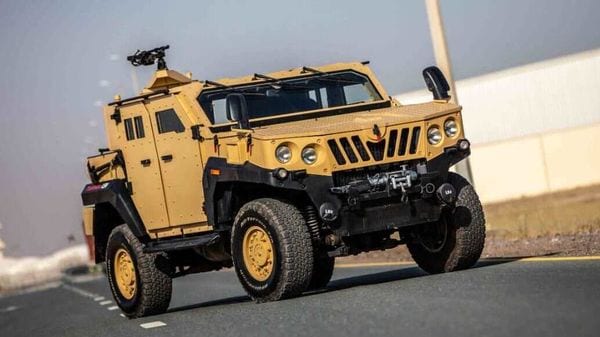 The Mahindra ALSV is a light armoured specialist vehicle built for use by military and defence forces. (Photo courtesy: mahindraarmored.com)

Manning difficult terrain along the border is always an uphill task. That is why the Indian forces often depend on Indian manufacturers to develop customised armoured vehicles that can tackle any terrain with ease.

Mahindra emirates vehicle armouring (MEVA, Mahindra Armoured), part of the Mahindra & Mahindra, is among the Indian manufacturers which has custom-built vehicles made for such terrain. MEVA is experienced in building high quality armoured vehicles and tactical armoured vehicles.

One such vehicle is the Mahindra Armoured Light Specialist Vehicle (ALSV). It is a light armoured specialist vehicle built for use by military and defence forces. The Mahindra ALSV has already gone through Government Defence Force’s trial and test program for nearly 18 months. Recently, Mahindra Group’s chairman Anand Mahindra took to Twitter to praise this vehicle as one of the meanest to guard Indian borders. He said, "Our defence team believes M&M translates to 'Mean Machine.' This is one of their meaner ones."

The Mahindra ALSV is meant for patrolling in high intensity areas, can launch a raid in open or desert terrain, can be used in special forces operations or as part of quick reaction teams besides reconnaissance jobs.

The Mahindra ALSV can withstand 7.62 x 51mm bullets and HE36 hand grenade blasts. is powered by a Steyr 3.2-litre, 6-cylinder turbodiesel engine that develops 215HP and a peak torque of 500Nm. The engine is coupled to a 4-speed automatic transmission and has a top speed of 120 kmph and acceleration from 0 to 60 kmph in about 12 seconds.