Home Auto Cars News Watch: Tesla Model 3 On Autopilot Hit By A Semi Truck And Pushed For Half Mile

Watch: Tesla Model 3 on Autopilot hit by a semi-truck and pushed for half mile 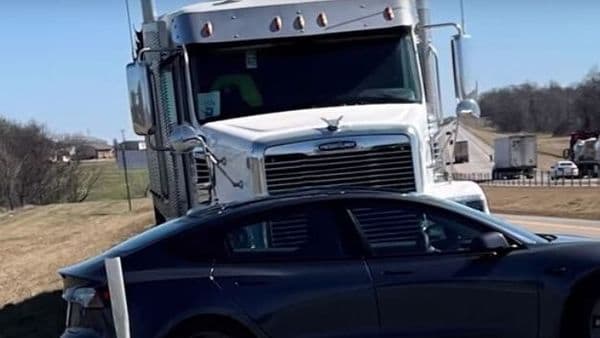 The Tesla driver was safe despite the accident. (Image: Youtube/Wham Baam Teslacam)

Tesla electric cars have been making headlines for a wide range of reasons, some of them for the wrong ones. In recent times, several crash reports have been notified involving Tesla cars, where the EVs crashed into other cars or people. But, this time a Tesla Model 3 was hit by a semi-truck and pushed for half a mile on the highway.

The incident took place in the US. The Tesla Model 3 was reportedly running on Autopilot when a semi-truck clipped the electric compact sedan's rear end while making an abrupt lane change.

The Tesla Model 3 driver has said that he was driving past the semi-truck in the right lane when suddenly the semi changed lane to the right and clipped the rear of the electric car. The impact resulted in the semi-truck spin out and end up right in front of the truck.

The Tesla driver also said that the Autopilot system onboard alerted him about the impact of the semi-truck right before the mishap. However, it was too late to react. He also said that he tried to steer away from the truck, but the force of the large truck along with its momentum was too much for the sedan to overcome.

Fortunately, the Tesla driver was safe despite such a dangerous situation. The damage to the Tesla Model 3 totalled a whopping $20,000. It would take months to be repaired.