Tesla Cybertruck has given rise to several clones around the world.The original Cybertruck is touted as being a pick-up truck with the performance of a sports car.
By : Shubhodeep Chakravarty
| Updated on: 24 Mar 2020, 09:19 AM 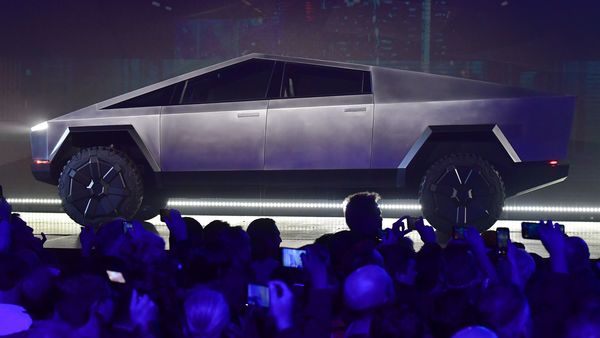 File photo of the original Cybertruck unveiled by Tesla.

There has been an enormous buzz around the Tesla Cybertruck ever since it was first showcased to the public in November of 2019. Tesla CEO Elon Musk touted it as the most capable electric pick-up truck ever made and also bragged about its 'Go Anywhere' abilities. While many questioned the Cybertruck's looks, calling it outlandish, others praised it for breaking conventional design norms.

Little wonder then that the buzz has translated to several clones of the Cybertruck cropping up around the world but it is in China that the most similar copy as yet may be at. In a video on Youtube, posted by JayinShaghai, a copy of a Tesla Cybertruck is presented with design inspiration taken from Lamborghni.

The Cybertruck clone in the video may be the nearest fully-functional clone of the original, complete with the sharp LED head lights andgeometric body shape. The slight changes which sets this vehicle apart from the original and also highlights the inspiration from Lamborghini are the additional creases on the hood, several inverted trapezoid elements and carbon fiber wheel arches. It is admitted that the carbon fiber wheel arches may not be the most practical on a heavy-duty pickup truck but work for the design language of the vehicle.

The Cybertruck clone also comes complete with an auto folding tail gate which is operated by a remote button.

The vehicle is expected to continue getting updated even if it is meant to only be a demo. Nonetheless, it has generated quite a lot of interest online among Tesla enthusiasts.

The actual Tesla Cybertruck, however, has a fan base of its own. Priced at $39,900 for the base variant, the Cybertruck will come in two other variants. The first batch of bookings filled up at lightning speed with even Dubai Police placing an order.

The Cybertruck is slated for a 2021 launch. It is being advertised as a pick-up truck with the performance of a sports car, and claims to go from stationery to 60 miles per hour (96 kmph) in just 2.9 seconds. It can also reportedly last 250 miles or 402 kms on a single charge.