Under the late night sky, Elon Musk raced away in a Cybertruck from Tesla that has become the talk of towns the world over.
By : HT Auto Desk
| Updated on: 10 Dec 2019, 13:11 PM 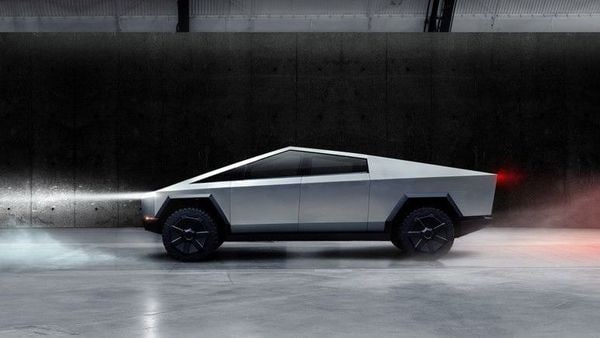 After a massive buzz surrounding the Cybertruck in the past month since it was showcased on November 22, the futuristic vehicle - also termed blatantly bizarre by many, was seen in real road conditions in Los Angeles recently. And the man behind the wheel was none other than Elon Musk.

Musk, CEO of Tesla, was spotted in a video taken on the LA freeway, cruising into the late night sky. The Cybertruck looked like a machine from the future and glided with ease with all its safety lights appearing bright and every bit as futuristic as the entire vehicle is touted to be.

What has made the Cybertruck the talk of towns around the world is that Tesla describes it as a vehicle with the 'utility of a truck and performance of a sports car.' In fact, the company claims that the Cybertruck can go from stationery to 60 miles per hour (96 kmph) in just 2.9 seconds. Also, the Cybertruck's electric heart gives it a stated range of 250 miles or 402 kms.

(Also read: Tesla is now gearing up to bring in Cyberquad electric ATV)

At the launch event in November, Musk raved about the Cybertruck's impenetrable body and even had a sledgehammer demonstration to prove it. And while the hammer test went off well, cracks appeared in the window when stones were hurled at it.

Nonetheless, the Cybertruck has caught the imagination of people around the world and the first batch of pre-orders are reportedly closed due to strong demand. Even Dubai Police has placed an order for a Cybertruck.