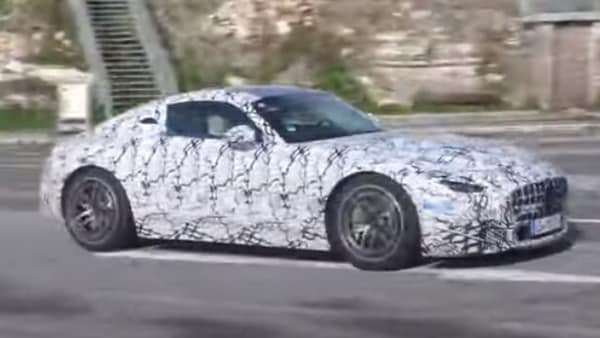 The new Mercedes-AMG GT has been spotted testing in a new video that emerged online. Slated to debut later this year, the new Mercedes-AMG GT is expected to break cover soon, giving us the full video of the production model. The high-performance luxury car shares its platform with the Mercedes-AMG Roadster. This could give us an idea of what the upcoming AMG GT is going to look like.

The current generation Mercedes-AMG GT comes as a well-capable sportscar that has already made its mark against the mighty Porsche 911. In that case, the upcoming model too will have big shoes to fill. Mercedes-AMG marked the end of the line for the current generation AMG GT with the record-setting Black Series AMG GT Coupe. Expect the upcoming model to promise something even bigger.

Speaking about the upcoming AMG GT, the video reveals two versions of the car. The first one is a V8-powered GT63 which is the top-tier variant, while the base model is a GT53. Expect the new Mercedes-AMG GT Coupe to come with a hybrid powertrain technology onboard as well. This would not only boost the performance of the car but enhance its efficiency as well.

The new Mercedes-AMG GT Coupe is expected to come with a similar powertrain as the Mercedes-AMG GT63 S E Performance four-door coupe. This hybrid sedan gets a twin-turbo V8 engine combined with a rear-mounted electric motor. This powertrain churns out a combined output of 831 hp and 1,467 Nm of maximum torque. This engine is mated to a nine-speed automatic transmission and a two-speed transmission for the electric motor.

In terms of performance, the Mercedes-AMG GT63 S E Performance is capable of sprinting from 0-100 kmph in only 2.9 seconds. Expect the lightweight new AMG GT Coupe to deliver even superior performance.