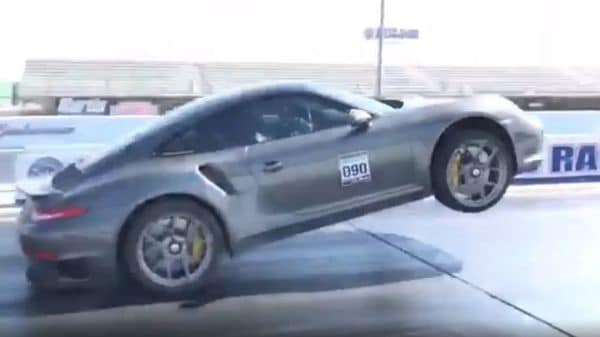 Known for its sleek looks and stellar performance, a Porsche 911 has long been raved for its track capabilities that have redefined automotive engineering. In the hands of a capable automotive enthusiast, the sportscar can continue to push the boundaries as was seen at a recent private track event in which a modified Porsche 911 Turbo S amazed crowds with a wheelie like no other.

According to a report in Motortrend, the modified Porsche 911 performed the wheelie at a race track in California all thanks to the jaw-dropping 1,000 hp of pure power from its twin-turbocharged flat-six engine with a seven-speed dual-clutch automatic transmission. This power output figure is double than what was originally in the car before its owner - Mark Blackwell - joined hands with Sam Ahdoot of ByDesign Automotive Group to add more thunder.

With a massive boost in its power output and the weight distribution favouring the rear of the sportscar, the Porsche 911 in question managed to lift up its nose by around two feet before reclining and racing forward. And while wheelies on bikes are hardly uncommon, the sight of a Porsche airing its front wheels has created quite a buzz at the track and, subsequently, online.

Blackwell was later quoted as saying that his car hardly suffered any damage with only a graze on the rear diffuser serving as evidence of the stunt. Blackwell also admitted that this was not the first time he had tried a wheelie in the Porsche but while his previous attempts saw the car rise by a few inches, the one at the track was his biggest ever.

That Blackwell's Porsche 911 Turbo S was able to perform the wheelie is testament to the complex modifications made in the car which allowed for a synthesis between power, grip and rear-weight bias - all contributing to the sportscar making quite a bang before thundering across the track.