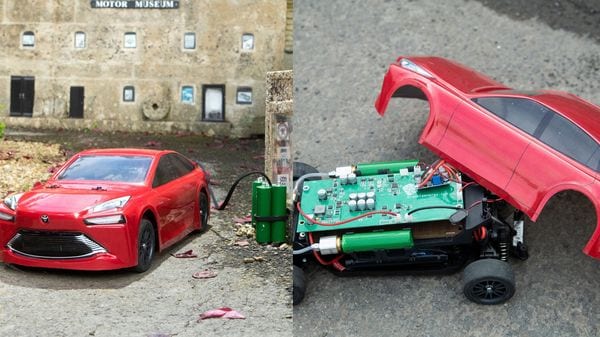 Toyota has introduced a 1:10 scale model of the Mirai fuel cell vehicle that is controlled by remote and just like its big brother, runs on hydrogen. The mini Toyota Mirai saloon uses a miniaturised fuel cell and can cover up to 400 miles on a tank of hydrogen.

The automaker has released a short film on its YouTube channel featuring a life-size Toyota Mirai and the mini remote control version of the hydrogen-powered saloon. The video shows a test run of the toy car running on hydrogen along with its big brother. Toyota says that this experiment was conducted to showcase the potential of hydrogen and how it can be used in multiple ways.

To make a mini Mirai run on hydrogen, just like its bigger sibling, Toyota took help of UK-based tech company Bramble Energy to create a miniature fuel cell, which the company says was a challenge. This was created using a miniaturized version of Bramble's printed circuit board fuel cell system so that it could fit into a 1:10 scale radio control chassis.

The companies created two small hydrogen tanks resembling AA batteries to be installed on either side of the board so as to fee the hydrogen manifold in front. All of this was mounted on a 1:10 scale chassis from Tamiya, another partner for this experiment. The company supplied a TT-02 four-wheel-drive chassis for the foundation of the scale Mirai.

The Bramble Energy system provides a power of around 20 Watts, which is double the running time capacity as compared to a conventional battery powered remote control car. The hydrogen fuel canisters fitted on the Mirai chassis are switchable, allowing for quick replacement when fuel runs out.

Commenting on the success of the experiment, David Rogers, Toyota (GB) spokesperson on alternative fuel, said, “Hydrogen will play a key role in meeting our future energy needs, bringing zero emission driving for both big cities and small villages."