Toyota has claimed that this feat achieved by Toyota Mirai is a new distance milestone for zero-emission vehicles.During the trip, Toyota Mirai used a total of 5.65kg of hydrogen.
By : HT Auto Desk
| Updated on: 12 Oct 2021, 07:00 PM 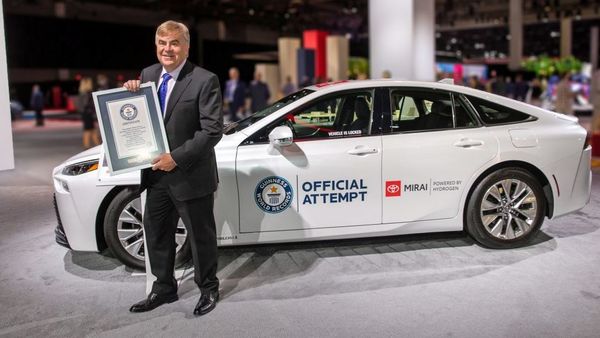 The 2021 Toyota Mirai has set a Guinness World Record for becoming the first hydrogen fuel cell electric vehicle to cover the longest distance without refuelling. With this feat, Toyota seems to be pushing itself towards becoming a cleaner and greener brand.

Toyota Mirai took a roundtrip of Southern California and covered a distance of 1359 km after it was filled with hydrogen before starting the journey, the automaker informed. It also claimed that this record sets a new distance milestone for zero-emission vehicles. Executive vice president of Toyota Motor North America, Bob Carter shared that the brand is proud of the technology that is one of the developing lineups of zero-emission vehicles in the automaker's portfolio. "In 2016, the Toyota Mirai was the first production fuel cell electric vehicle available for retail sale in North America, and now the next generation Mirai is setting distance records," he added.

Toyota informed that the official record attempt was closely monitored by Guinness World Records, taking into account its strict rules and documentation procedures. The two-day trip began on August 23, 2021, from the Toyota Technical Center (TTC) in Gardena, California. The hydron fuelled EV travelled through San Ysidro, Santa Barbara, Santa Monica and Malibu. When the vehicle returned to TTC, it had covered a distance of 761 km. The following day, the car went through the San Diego freeway between Los Angeles and Orange County until Toyota Mirai had no more hydrogen left. It was coasted into TTC where the vehicle showed a total distance of 1359 km that was covered.

Toyota informed that by the end of the trip, the Mirai consumed a total of 5.65kg of hydrogen and crossed 12 hydrogen stations along the drive routes without refuelling.