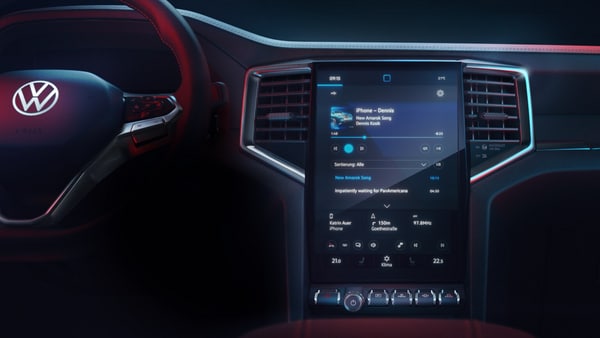 The 2023 Volkswagen Amarok's touchscreen infotainment system covers most of the centre console.

Volkswagen has released another teaser image revealing the new generation Amarok pickup truck's massive touchscreen infotainment system that has been derived from Ford Ranger and comes with a portrait orientation. While the rest of its cabin appears distinctive with unique styling elements, the touchscreen infotainment system appears sourced from Ford Ranger.

The 2023 Volkswagen Amarok's touchscreen infotainment system covers most of the centre console and it comes with a diameter between 10-12 inches, depending on the trim level. This is a design philosophy Volkswagen has adopted, which is very similar to Ford. Expect the touchscreen display to offer a host of connectivity features and a wide range of functionalities. The screen would come integrating climate controls, navigation, online services, sparkling assistant, media control and vehicle settings as well.

The image also reveals that the portrait-style large touchscreen infotainment display is flanked by the AC vents, which appear slightly different from the Ford Ranger, thanks to the angular shape. The physical buttons for the shortcuts below the infotainment system are new in the 2023 Amarok. They come with an aircraft-style design. The latest teaser also reveals the 2023 Volkswagen Amarok’s steering wheel with integrated buttons and an illuminated emblem.

Volkswagen has also said that besides this large touchscreen infotainment display, the new Amarok pickup truck will come with a fully digital instrument cluster, IQ.Light Matrix LED technology, over 30 ADAS, 10-way electrically adjustable seats, and a premium sound system inside the cabin.

Speaking about the powertrain, the 2023 Volkswagen Amarok will be available in petrol and diesel engine options. There will be single petrol and four diesel engine options ranging between 2.0-litres and 3.0-litres in capacity. The new Amarok will come with a towing capability of 3.5 tonnes and a cargo-carrying capacity of up to 1.2 tonnes. It is expected to debut by the end of this year.