Volkswagen had launched the three-row Tiguan AllSpace and the five-seater T-Roc SUVs in India last year. Now the German carmaker has pulled both the SUVs out of their official website ahead of the launch of Tiguan facelift SUV next week.
By : HT Auto Desk
| Updated on: 01 Dec 2021, 09:34 AM 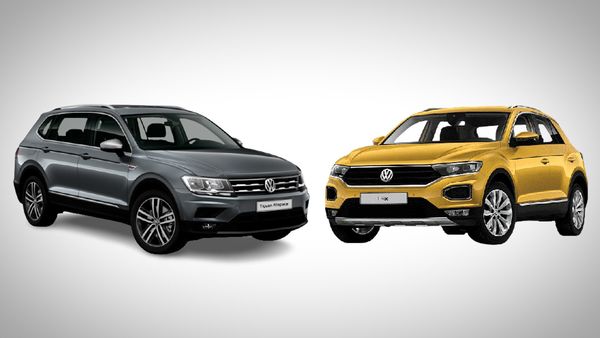 Volkswagen has discontinued Tiguan AllSpace, T-Roc SUVs in India ahead of the launch of Tiguan facelift SUV.

Days before driving in the new generation Tiguan facelift SUV to India, Volkswagen has rejigged its fleet in the country by pulling out the Tiguan AllSpace and the T-Roc SUVs from the market. Volkswagen is all set to debut the 2021 Tiguan SUV on December 7, which is set to join other cars from the German auto giant like Taigun SUV, Vento sedan and the Polo and Polo GT hatchbacks.

While the Tiguan AllSpace has completely disappeared from the official website, Volkswagen has all but withdrawn the T-Roc with a disclaimer that says ‘Bookings closed. Stay tuned for more updates’. This could mean that Volkswagen has kept its option open to bring in a facelift version of the T-Roc later, something that can't be said at the moment for the three-row Tiguan AllSpace SUV.

Volkswagen had launched the three-row Tiguan AllSpace and the five-seater T-Roc SUVs in India last year. While the Tiguan AllSpace SUV prices started at ₹34.20 lakh (ex-showroom), the T-Roc SUV was priced at ₹21.35 lakh (ex-showroom). Earlier in March, Volkswagen had showcased both the SUVs as part of their plans to launch four SUVs in India. Among the two others, Taigun has already been launched. The last one, Tiguan facelift, will make debut next week.

There has been no official communication from Volkswagen to explain the decision to pull out these two SUVs even before they could complete two years in the market. However, Tiguan AllSpace SUV could not garner much numbers in terms of sales, and barely made its mark in its segment so far.

The Volkswagen T-Roc SUV was first introduced in India around March 2020. Back then, it was priced at ₹19.99 lakh (ex-showroom) and was a CBU model, limited to just 1,000 units. It was completely sold off in India within a few months and VW announced the closure of bookings in September last year. The new 2021 T-Roc SUV was introduced in March this year.