The new Volkswagen Tiguan will be powered by a 2.0-litre TSI engine which is mated to a seven-speed DSG transmission unit.
By : Shubhodeep Chakravarty
| Updated on: 25 Nov 2021, 02:11 PM 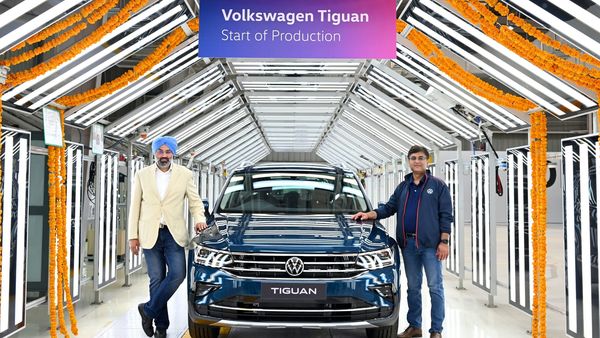 The wait for the new Volkswagen Tiguan is coming to an end with the latest SUV from the Germans entering production cycle at the company facility in Aurangabad. The company, in a press statement on Thursday, underlined that Tiguan would fulfill the commitment of  four new SUVWs by 2021 in India. The new Tiguan is scheduled for an official launch come December 7.

Based on the MQB platform which underpins several models on offer from brands under Volkswagen Group, the latest Tiguan will be powered by TSI technology and will get a 2.0-litre TSI engine which is mated to a seven-speed DSG transmission unit with 4MOTION technology.

While the updated Tiguan had made its global debut in 2020, its India entry is being seen as a major move by Volkswagen to make further inroads in the market, especially after the launch of the smaller Taigun which has enjoyed early success. “Globally, the Tiguan has proven its mettle as a robust and capable carline swiftly raising up to the rank as a global best-seller," says Ashish Gupta, Brand Director at Volkswagen Passenger Cars India. “The Tiguan is a perfect SUVW, equipped with the right amount of power, performance and elegance. We look forward to the launch of the new 5-seater Tiguan in early December 2021."

In terms of styling, the new Tiguan SUV gets revised front grille with chrome embellishment, LED Matrix headlamps and LED daytime running lights along with an updated bumper housing triangular fog lamps. Over at the side, the alloy design has been changed while character lines have been made more prominent. The rear is completed with LED tail lights which are now slimmer.

Volkswagen is accepting registration of interest for the new Tigaun which, once launched, will renew its rivalry against the likes of Hyundai Tucson, Jeep Compass and Citroen C5 Aircross.