A peek inside Virat Kohli's larger than life car collection

Virat Kohli has over half a dozen Audi cars in his garage. Moreover, he also loves to drive around in high-end British supes. Know which is his favorite.
By : HT Auto Desk
| Updated on: 14 Apr 2020, 10:03 PM 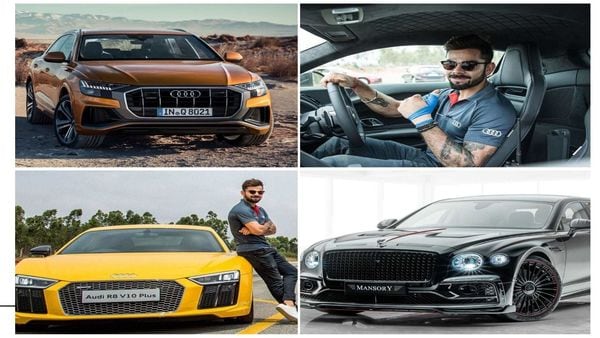 Virat Kohli, Indian Cricket Team Captain and currently the top-ranked ODI batsman in the world, has a huge collection of super cars and here's a peek inside his garage.

Starting off with one of his most-loved possessions, a Bentley Continental GT which he bought sometime in 2018. He has been spotted driving around in this luxury sports car several times when he is in his home city. The Bentely Continental GT runs on a 4.0-litre V8 petrol engine which develops a ground shaking power in excess of 500 PS and 660 Nm. The car is also available in a higher powered 551 PS/680 Nm variant.

A Land Rover in a celebrity's garage is no surprise, and Kohli has a white-cloured Range Rover Vogue. The SUV is stationed at his Delhi residence, and surprisingly, his wife, Anushka Sharma owns the same model in which she drives around in Mumbai.

The Range Rover Vogue sources power from a 4.4-litre V8 diesel engine which is known to deliver 335 PS and 740 Nm of peak torque.

Another Bentely in Kohli's garage is the Flying Spur, which he is seen using mostly in Mumbai. He's snapped multiple times using this car for his airport drops and pickups.

The cars runs on the same 4.0-litre V8 engine as the Continental GT. Moreover, it also comes in another variant which runs on a more powerful 6.0-litre W12 engine which churns out 616 PS and 800 Nm.

Virat Kohli endorses only select brands and Audi is one of them. His love for Audi cars known no bounds and he has not one or two, but more than half a dozen of some very expensive Audis. His Audi garage comprises of S5, RS 5, Q7, Q8, A8 L, R8 LMX, and R8 V10 Plus.

Apart from a garage full of high-end British and German sports cars, Kohli also has a Toyota Fortuner and Renault Duster in his list. The latter was awarded to him for his outstanding performance in a one-day Cricket series back in 2012.