The E115 SUV is part of Honqi's electric push and aims to take on luxury carmakers like Rolls-Royce.Hongqi, meaning Red Flag, is widely regarded as a symbol of China's ruling Communist Party, with former leader Mao often seen riding in high-end black saloons.
By : Sabyasachi Dasgupta
| Updated on: 12 May 2020, 03:12 PM 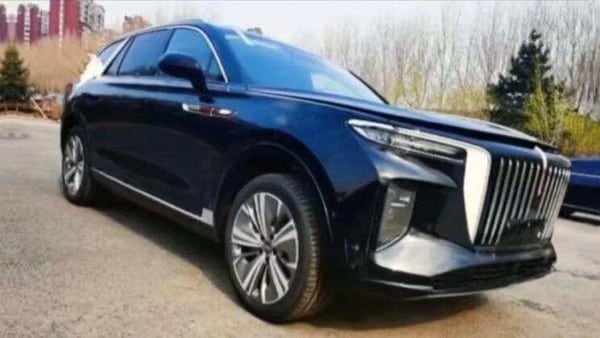 The E115 SUV is part of Honqi's electric push and aims to take on luxury carmakers like Rolls-Royce. (Photo courtesy: Facebook/@carnewschina)

The latest SUV from the Chinese carmaker Hongqi was revealed in a series of photos shared on social media recently. The E115 electric SUV was spied during road tests in China. The SUV is likely to be launched sometime towards the end of the year.

The E115 electric SUV is part of the company's plans to go electric with its fleet. Apparently, the car looks exactly like a concept presented in 2019 at the Guangzhou Motor Show. Hongqi E115 is equipped with a large grille, thin LED headlights and has an elongated roof line with sharp C-pillars. One of the notable differences between the production model and the concept is the body part behind the front wheels. The rear section of the SUV is identical to the prototype - it gets a similar shape with the LED strip running across.

During the presentation of the Hongqi E115 concept, it was impossible to look into the cabin - the manufacturer darkened all the windows. Spy shots showed what to expect in the interior of the new product. The cabin of the SUV is equipped with a touch screen infotainment system, a digital dashboard, as well as a touchscreen climate control system. The centre console and seats of the electric SUV have Alcantara finishing.

The Hongqi E115 will be offered in China with two electric motors - one located on the front axle and the other on the rear. The power of the first will be 215 horsepower at 350 Nm, and the second produces 295 hp and 420 Nm. They will be powered by a lithium-ion battery with a capacity of 92.4 kWh, which will provide up to 600 km of range in single charge. The pickup of the SUV is also an impressive 4 seconds between zero and 100 kmph.

As part of the FAW Group, one of China’s biggest car manufacturers, Hongqi aims to take on luxury car brands like the iconic Rolls-Royce by targeting the rich in China. In fact the company managed to rope in Giles Taylor, the former design chief at Rolls-Royce, two years ago.

Hongqi, meaning Red Flag, was launched by FAW in 1958 and is widely regarded as a symbol of China's ruling Communist Party, with former leader Mao Zedong often seen riding in high-end black saloons.