The Jeep Wrangler hit the Toyota Camry police car from behind to severely damage it.The prisoner fled the spot in the Wrangler, which was allegedly stolen.
By : HT Auto Desk
| Updated on: 15 Jul 2021, 06:36 PM 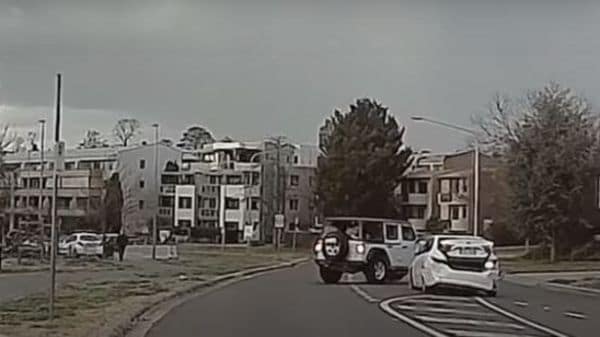 How many times you have seen a high-speed car chase or prisoners being helped in escaping police custody. Of course, numerous times in Hollywood movies. Something like that happened in Australia last week.

In Canberra of Australia, a prisoner managed to escape custody last week after two women in a Jeep Wrangler repeatedly crashed into a police car. The police car, a Toyota Camry was transporting the prisoner when the Wrangler rammed its rear.

The dashcam footage from a vehicle shows that the impact caused severe damage to the police car, but the Wrangler driver didn't stop. She rammed it again and pushed off the road.

According to eyewitnesses, the Jeep Wrangler was running at around much faster than the 80 kmph speed limit. The SUV was seen aggressively swarving and clipping the back of the police Camry. This resulted in the police car span out onto the median strip.

Police later found the Jeep SUV torched and abandoned in a nearby suburb, as reports suggest. The escaped prisoner and his accomplices too were found in a house in Canberra later. Police arrested them all. While Kane was charged with escaping custody, his accomplice was charged with dangerous driving, car theft, property damage and assaulting frontline staff.

During the whole incident, no other motorists or cars or police officers were injured, reveals the report.

Fortunately, no other motorists, nor the police officers inside the Camry, were injured in the incident. According to the report, this was the first time such an incident happened in Canberra.