Toyota Frontlander SUV is most likely to be launched in China followed by other markets.The Frontlander by Toyota will be placed below the currently present RAV4 SUV.
By : HT Auto Desk
| Updated on: 29 Sep 2021, 02:56 PM 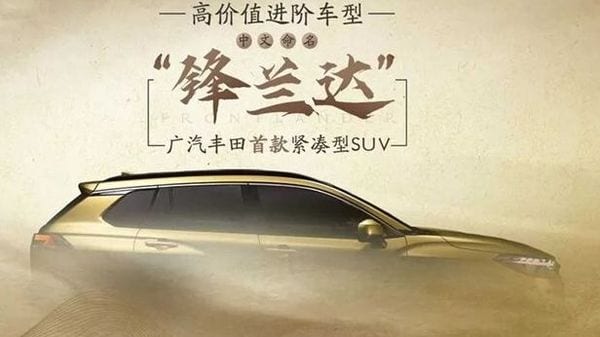 Toyota Frontlander SUV is most likely to be launched in the Chinese market followed by other markets.

The Frontlander SUV will be placed below the currently present RAV4 SUV. It will be built by Toyota under its partnership with GAC. For the record, Toyota already sells a range of models under its venture with GAC. It sells cars such as the Wildlander and Crown Klugger, which come out as twins of the Toyota RAV4 and Highlander SUVs.

The new Frontlander SUV shares most of its underpinnings with the Japan-spec Corolla Cross SUV. While the side profile of both models remains identical, the Frontlander gets some unique elements in the form of headlamps, front main grille, and tweaked bumpers.

The Frontlander comes built on Toyota's TNGA modular platform. The same structure is also found in a range of SUVs and sedans by Toyota in the global market. At the heart of the Frontlander sits a 1.8-litre petrol which will be seen with hybrid tech. It will also benefit from AWD which will be offered as standard on most variants.

(Also Read: Toyota cars in India to be pricier from October 1: Know why)

There is no official confirmation if the SUV will be launched in the Indian market after its Chinese debut. Toyota India, on the other hand, may bring its  RAV4 SUV to the country as the same has been papped testing on the Indian roads a few months back.