The Toyota TF109 was an early test car for the team leading up to the 2009 season.After the team retired from F1 after its most successful season with Jarno Trulli and Timo Glock, the car was given a test role for Pirelli.
By : Sabyasachi Dasgupta
| Updated on: 03 Jun 2020, 08:40 AM 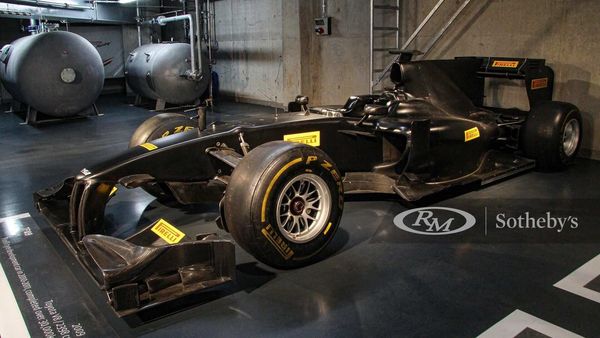 The FIA, governing body of global motor sport, ​​will soon be holding an online auction at RM Sotheby's, and has literally pulled out all the stops for that. Several drivers are donating suits and other racing materials, but Toyota is stealing the show by making its never-deployed car available for the 2010 season.

Toyota gives permission to auction the Toyota TF109 with chassis number 01. This car was an early test car for the team leading up to the 2009 season, but after the team retired from F1 after its most successful season with Jarno Trulli and Timo Glock, the car was given a test role for Pirelli. The tire brand needed data to prepare for its return to F1 in 2011. The TF109-01 comes with a working engine, gearbox and a jet black Pirelli livery.

Various drivers make racing materials available for the auction. Damon Hill is giving away his 1995 helmet and coverall that won the Australian GP, ​​while veteran Tom Kristensen donates his racing suit to RM Sotheby's winning his last WEC race in 2014.

RM Sotheby’s, one of the most renowned auction houses globally, has been involved in various charity auctions to raise money and help in the fight against the Covid-19 pandemic that has killed nearly 4 lakh people globally.

Money raised from the upcoming auction will be donated to the IFRC, where the FIA Foundation have made an immediate donation of one million euros, while have set up an auction too now. The bidding will start on June 15 with the end date on June 22 of this month.

Among others, donations came from Ferrari's Charles Leclerc and Sebastian Vettel. They have put up their race suits up for auction. Mercedes’ will put up race suits, boots and gloves used by its F1 drivers Lewis Hamilton and Valtteri Bottas, as well as a chance to spin a day in Ferrari's simulator. Former F1 champion Damon Hill has also donated his 1995 race suit and helmet. Le Mans winner Tom Kristensen has donated his Audi race suit from 2014.