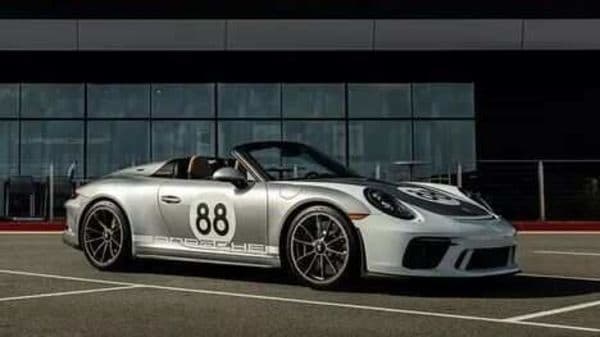 The seventh-generation Porsche 911 gets a 4-litre engine which is capable of belting out 502 hp of maximum power.

A car that would take the prime spot in the garage of any sports car aficionado, a final last-generation Porsche 911 was recently auctioned for half a million dollars to generate funds to support the fight against Covid-19 disease in the United States.

Porsche reportedly put up the car for auction in a bid to generate funds for a good cause. It is learnt that the company added a number of upgrades to the car which included a 911 Speedster Heritage Design Chronograph. It was initially expected that the car would fetch a price of around $300,000 but the winning bid closed at $550,000.

While the identity of the winner has not been revealed, he or she is now also entitled for a behind-the-scenes tour of the Porsche AG Weissach development headquarters.

According to Motor1, the final 911 Speedster is only one of 1,948 units manufactured by Porsche. It gets a 4-litre engine which is capable of belting out 502 hp of maximum power and has a six-speed manual transmission unit.

The proceeds from the auction will be given to United Way Worldwide’s COVID-19 Community Response and Recovery Fund. "We are honored that this piece of our history could help an important cause," Porsche said in a tweet.

We finished the race strong. Thanks to generous bidders, our 911 Speedster auction raised $500,000. Porsche is adding to that for a total donation of $1 million to benefit the @UnitedWay COVID-19 fund. We are honored that this piece of our history could help an important cause.

The car will be handed over to the winner in a ceremony at a subsequent date which will see Porsche Cars North America President and CEO Klaus Zellmer in attendance.