The Toyota Harrier SUV was launched in April this year.The carmaker hopes to sell more than 3,000 unites every month.
By : Sabyasachi Dasgupta
| Updated on: 17 Jun 2020, 12:00 PM 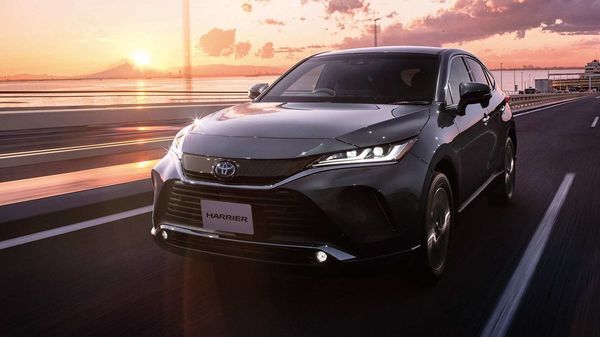 Toyota has set itself a challenging target of selling more than 3,000 units of Harrier SUV every month.

Months after it revealed the new Harrier, Toyota Motor has launched the SUV in Japan. The price starts at 2,990,000 yen (around ₹21.5 lakh) and goes up to 5,040,000 yen (nearly ₹36 lakh). The carmaker has opened bookings for the new Harrier and expects to sell more than 3,000 units every month.

Toyota took the covers off the all-new 2021 Harrier SUV earlier in April. The fourth generation of the mid-size SUV, which was first launched back in 1997, received a host of new updates in its design and technology.

The new Harrier uses the TNGA (GA-K) platform for its basic structure. The suspension system benefits from MacPherson struts at the front and a double wishbone setup at the rear. The front and rear suspension geometry has also been optimised to produce a well-balanced rigid body.

(Also read: Spot the difference - Is the Toyota Venza SUV a US version of the Harrier SUV?)

The new Harrier has a front view that emphasises its sharp styling through the continuity of lines flowing from the front upper grill through to the headlamps. The signature lamps can be easily spotted from a distance. Despite a simple structure, the side view offers a dynamically changing body cross section. The combination of a narrowed coupe cabin with sports car-like wheel housings extends from both sides of the body and gives a ruggedness to the rear view.

The Harrier SUV will be available in seven colours, including Precious Black Pearl, to show off the beautifully changing shades.

The centre console inside the new Toyota Harrier gets a wide and imposing impression of a horse's saddle. The instrument panel is set within the edges of the saddle. The dashboard extends out from the instrument panel to the door trims on either side. The interior gets synthetic leather treatment, and bentwood-inspired wood tones and piping throughout. A panoramic sunroof, used for the first time by Toyota, is equipped with electric shades and electro-chromatic windows.