Toyota Hilux spotted in India ahead of possible launch next year

Sources had earlier confirmed to HT Auto that Toyota is readying the Hilux pickup truck for a launch sometime early next year.
By : HT Auto Desk
| Updated on: 20 Dec 2021, 09:23 AM 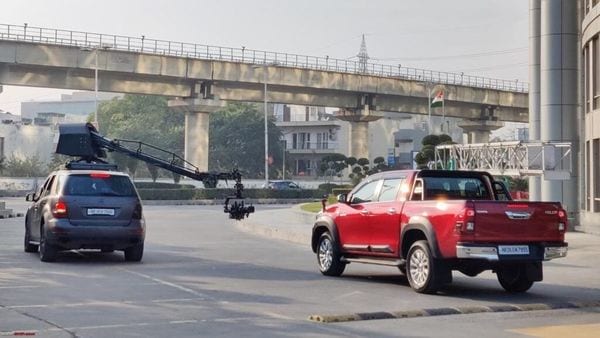 Toyota Kirloskar Motor is all set to expand its lineup of Fortuner and Innova Crysta with an adventure lifestyle vehicle Hilux pickup truck in India soon. The Japanese carmaker is expected to launch the 2021 Hilux in the country in 2022. Ahead of the possible launch, the pickup truck was spotted on Indian roads over the weekend.

A red Toyota Hilux was spotted by several netizens on Sunday. As socal media posts suggest, it was probably taken out for a commercial shoot, with another vehicle behind it with cameras mounted on top.

Sources had earlier confirmed to HT Auto that Toyota is readying the Hilux pickup truck for a launch sometime early next year. Toyota will possibly launch the Hilux in India in the first month of the new year itself. Globally, Hilux has been a popular model for Toyota with more than 18 million units sold since it was first launched way back in 1968.

The Hilux is considered to be a capable off-roader while also offering several comfort and convenience features in the cabin to play the role of a lifestyle vehicle too. It comes with features like ambient lights, auto air conditioning, an eight-inch infotainment screen, JBL speakers, among others.

In India, Toyota Hilux is likely to share some key parts with the Fortuner and could be priced at around ₹30 lakh mark. In terms of competition, the Hilux will go head on against Isuzu V-Cross.