Top 3 MPVs in India in May: Ertiga rules while Carens, XL6 locked in tight race

The three-row MPV segment in India is now a fiercely competitive with several new or facelift models like Maruti Ertiga, XL6 and Kia Carens delivering good sales numbers.
By : HT Auto Desk
| Updated on: 07 Jun 2022, 11:05 AM 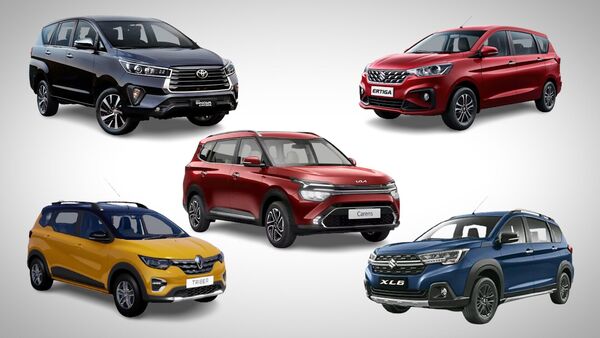 Three-row MPV segment in India continues to be dominated by Maruti Ertiga (top right). However, its XL6 and Kia's new Carens are locked in a tight race for second spot.

The three-row MPV segment in India is growing as carmakers sold more than 33,000 units in May. Since Covid-19 pandemic hit the country at the start of 2020, people movers like three-row seven-seater vehicles, especially MPVs, have seen a rise in sales with customers preferring personal mobility over public transport. The segment has also seen a bit of churning due to changed circumstances, which has resulted in increased sales and introduction of new models like Hyundai Alcazar, Kia Carens or facelift models like Maruti Ertiga and XL6.

Here is a look at top 3 MPVs sold in India in May:

Maruti's seven-seater Ertiga continues to rule the three-row MPV segment in terms of sales. In May, Maruti sold 12,226 units of the MPV. Maruti had launched the facelift version of the Ertiga MPV in April this year at a starting price of ₹8.35 lakh and going up to ₹12.79 lakh for the top-of-the-range variant.

Since its launch in 2018, Maruti Suzuki Ertiga has challenged the erstwhile segment leader Toyota Innova, now sold as Innova Crysta, in India. Sold at a more affordable price, Ertiga soon became one of the more popular models in the three-row MPV segment. The new generation Ertiga, which comes with a new generation engine, offers a lot of features too to attract buyers.

Kia's three-row Carens is the latest model to be introduced in the segment. Launched in February, the Carens has picked up sales and has challenged Maruti XL6, its key rival in the segment. In May, Kia India sold 4,612 units of Carens, beating XL6 by a. small margin. Kia Carens currently has the maximum waiting period among all cars launched this year. It has also dethroned Toyota Innova Crysta from second position in the segment.

Kia Carens beat Maruti's premium three-row offering XL6, which recently received a facelift. However, the XL6 is yet to pick up its sales numbers to challenge Carens or Innova Crysta yet. In May, Maruti Suzuki sold 4,085 units of XL6 six-seater MPV.

Among other contenders in the MPV segment, Toyota Innova Crysta, Renault Triber, Hyundai Alcazar and Mahindra Marazzo are placed from four to seven positions respectively.