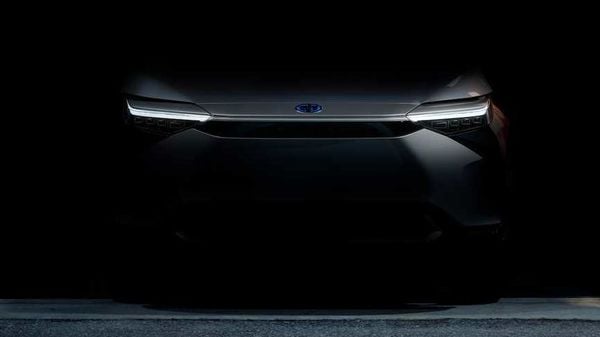 As the electric SUV has shown off its face, there is a blue brand logo signaling that it's a zero emission model.

Japanese automobile giant Toyota is gearing up to unveil its new electric SUV at the upcoming Shanghai Auto Show on April 19. Ahead of that, the auto brand has teased the zero-emission SUV online. The SUV is likely to be a part of Toyota's "Beyond Zero" sub-brand meant for all things electric.

As the electric SUV has shown off its face, there is a blue brand logo signaling that it's a zero emission model. The SUV has been reportedly developed jointly by Toyota and Subaru and it is based on a dedicated platform e-TNGA for electric vehicles. The electric SUV will have Subaru version as well, which is likely to be christened as Evoltis.

Being an electric vehicle, the upcoming Toyota SUV doesn't get a conventional front grille, as there is no conventional internal combustion engine under the hood of this car. There is a lower grille though, which could serve the purpose of cooling.

The sleek headlamps come with all-LED appearance and integrated to them are LED daytime running lights. Overall, the midsize SUV gets a sharp contoured front profile and the similar sharpness in design is expected to be carried across the other parts of the exterior as well. Toyota previously referred to this design theme as very European in the DNA and design.

This upcoming electric SUV is expected to receive a host of premium features inside the cabin. The automaker is yet to reveal anything about the performance and specification, but expect impressive numbers from it. The e-TNGA platform is capable of accommodating front, rear, and all-wheel-drive configurations as well as an array of electric motors and battery packs, ranging from 50 kWh to 100 kWh.

The production model of this midsize zero-emission model to hit the showrooms sometime by 2023. This is going to be the first of six bespoke Toyota battery electric vehicles that will be launched by 2030, which all will be developed in collaboration with Suzuki/Daihatsu, as part of these brands' global agreement.