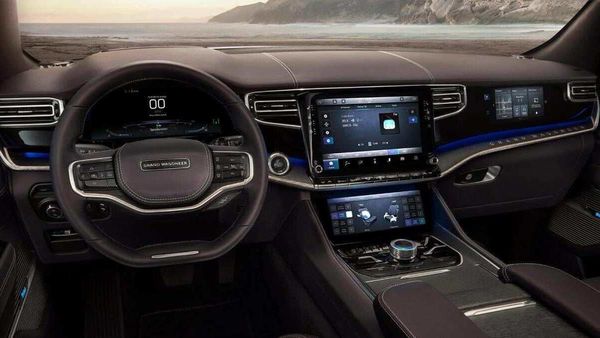 Grand Wagoneer Concept seeks to have a screen for every passenger in the car.

Less car, more screens is what modern vehicles seem to also be aspiring for with infotainment cluster fast becoming the fulcrum on which all technological gizmos are balanced on. From OLED screens to side touch panels for controls, the future is here and now. As such, concept vehicles are looking at pushing the boundaries even further to give a glimpse into what lies ahead and the Jeep Grand Wagoneer Concept plays the dual role of turning back time as well dialing it ahead with the addition of as many as seven screens which measure 45 inches in size, in total.

The Grand Wagoneer was a rather common sight on American roads in the 1960s and the new concept form attempts to bring about a sense of nostalgia while seeking to engulf occupants in the contemporary nuances of gadgetry galore. Highlighting it all is a massive 12.3-inch screen right behind the steering which puts out basic and essential vehicle statistics like speed and fuel efficiency. Because the concept is an electric vehicle, the same screen also displays battery charge among other safety features.

The display screen behind the steering on the Grand Wagoneer Concept.

Not good enough? Swipe eyes to the side and there is a 12.1 inch main infotainment screen which is home to FCA's brand-new Uconnect 5 infotainment system. Unlike some of the latest iterations of large screens on production version EVs, this screen remains horizontally-inclined and offers a wide range of customization options.

Under this is a smaller - in comparison of course - 10.3 inch screen which is similar to the Jaguar Touch Pro Duo displays. This screen, much like in new Jaguars, is for controlling the air conditioner as well as for creature comforts like seat position, recline degree, among others.

The screen under the main infotainment display inside the Grand Wagoneer Concept.

Then there is a screen exclusively for the front passenger. This too measures in at 10.3 inches and can offer wireless streaming via Bluetooth. Interestingly, a Bluetooth headset can also be connected to it.

Move over to the back and there is a cart-full of screens here as well.

There is a 10.3 inch display on the center armrest which can help passengers control seat alignment and operate customized air conditioning options. For entertainment purposes, there is a 10.1-inch screen for each of the two rear-seat passenger. Once again, this offers support for wireless streaming of content.

Yes, the Jeep Grand Wagoneer is currently in concept form but the path being taken by car makers across the world pretty much shows that all of the screens inside the cabin could well make way in the production version as well. And if and when it does, the vehicle could even outshine the just-unveiled Mercedes S-Class 2021 which boasts of five screens inside its ultra plush cabin.