The Sky Sphere comes as part of three electric concept cars that Audi announced earlier this month.Audi Sky Sphere will spawn out a luxury sports convertible, scheduled to be unveiled on August 10.
By : HT Auto Desk
| Updated on: 29 Jul 2021, 06:56 PM 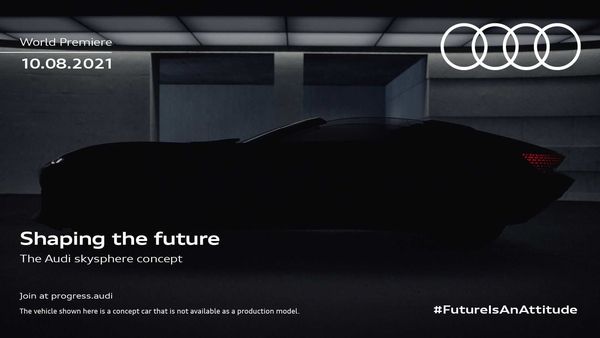 The upcoming concept car has been inspired by the iconic Audi Horsch 853A sports cabriolet.

German luxury car brand Audi teased three electric vehicle concepts online a few weeks back. One of them was the Sky Sphere that teased a sleek two-door luxury coupe with large wheels, a prolonged bonnet and a nicely curved low-sitting roofline.

(Also Read: Audi teases Grand Sphere concept. It looks like an A7 Sportback in post-ICE age)

The automaker has now announced that it will unveil the Sky Sphere in flesh on August 10 at its design studio in Malibu, California. The luxury carmaker has also posted a video on its social media channel. The video features Audi's design head Marc Lichte and its vice president Henrik Wenders.

The two Audi key officials discuss how the upcoming concept car has been inspired by the iconic Audi Horsch 853A sports cabriolet. The concept car is described as a sports transformation vehicle with autonomous driving technology and a fully electric powertrain.

It will be underpinned by Volkswagen's electric platform that is codenamed Project Artemis. It is a sports car that can transform into a luxury autonomous lounge.

"This concept car is, on one hand, a real sports car, and it can transform in only a few seconds into an autonomous lounge," describes Marc Lichte. Audi claims this concept car will come with some connected features that cannot be imagined.

The Sky Sphere comes as part of three concept cars that Audi announced earlier this month. These are - Sky Sphere, Grand Sphere, and Urban Sphere. The Grand Sphere will replace the luxurious A8 in the OEM's portfolio. Details about the Urban Sphere is scarce though. All these three concept models will be unveiled in flesh in over the next 12 months, revealed the automaker.

These concept cars are expected to spawn out their respective production models when Audi enters an all-electric era. The carmaker has already announced its EV plan with a timeframe. It aims to become an all-electric luxury car brand in the next decade.