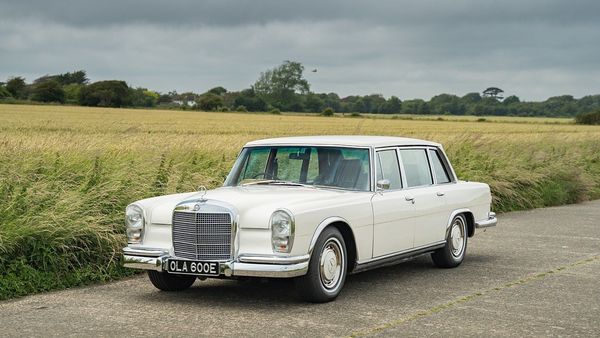 If you are a hardcore Beatles fan, then George Harrison is not an alien name to you for sure. Also, if you are an automobile enthusiast, then you probably know about the old and beautiful Mercedes 600 owned by the famous Beatles singing sensation.

Now, the retro 1967 Mercedes 600 is up for sale. Auction firm CollectingCars has put this retro beauty under the hammer. According to the auction firm, bidding started at £10,000 and the latest bidding is £80,000 for this vintage car.

George Harrison MBE, the lead guitarist of the Beatles bought this Mercedes-Benz 600 SWB back in 1967. It was one of the 2,190 units built by the German luxury marquee. A successor to 300D ‘Adenauer’ and built in limited numbers, the Mercedes-Benz 600 was one of the most expensive and technologically advanced cars from the German brand at that time.

Harrison’s MB 600 was originally painted in white and had a black leather interior. The cabin also has walnut trim on the dashboard and at other places as well. The combination of metal, wood and leather inside the cabin portrayed sheer luxury during that era.

The car's original registration was OLA 600E. In March this year, it underwent an extensive overhaul by West Sussex based Mercedes specialist John Haynes.

This car has been featured in many photographs along with its celebrity owner in his heydays. Before Harrison bought this car, it was a demonstrator model. Not only George Harrison, but Mercedes 600 was a favourite of many other celebrities as well.

Speaking about the opulence this car offers, it gets self-levelling, adjustable air suspension. This technology was years ahead of its time in 1963 when the car was first introduced. Also, this technology paved way for today's widely used Active Body Control system.

The luxury car also had power windows, armchair like rear reclining seats and a button controlled trunk as well. All these features were powered by a hydraulic system. These features might be very common in mass-market cars nowadays. But in that era, these were extreme luxury features.

The power source for this 18-feet long car is a 6.3-litre M100 V8 engine with a Bosch mechanical fuel injection system. This engine is capable of belting out 247 hp of power, allowing the Mercedes 600 to run at a top speed of 208 kmph. A 4-speed automatic gearbox performs transmission duty for this model.