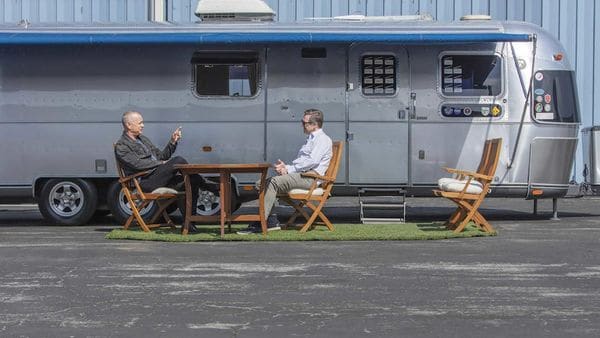 The Airstream Model 34 trailer has been Tom Hanks' home-away-from-home for last nearly two and half decades. (Image: Bonhams)

Caravans have their own charm and legacy. Airstream caravans are certainly unique among them for their timeless design, practicality, comfort on offer. Hollywood star Tom Hanks is among one of the owners of Airstream caravans and he is now all set to sell his trailer.

(Also Read: This toy camper truck carries a functional boat on its trailer)

Hanks will sell his 1992 Model 34 Limited Excella trailer that has travelled around the US with the star. The actor used this Airstream trailer during the filming of at least 18 famous movies including Sleepless in Seattle, Apollo 13, Forrest Gump, Philadelphia, Catch Me If You Can, Castaway, The Polar Express, Sully etc. Hanks last used this trailer back in 2017 while filming the movie The Circle.

This trailer was truly the home-away-from-home for the Academy award-winning actor. The trailer will go to the auction table at Bonhams during Quail Lodge Auction in Carmel, California on August 13.

The trailer comes with a signature Airstream design. It gets plenty of stickers on the windows marking Hanks' various movie locations spanning two and half decades.

Bonhams estimates the Airstream trailer would fetch around $250,000 in the auction. The amount might seem far fetched for a 30-year-old Airstream trailer. But the rich legacy this trailer is associated with comes with its own value. It has some extraordinary Hollywood connections.

Hanks ordered this Model 34 trailer when for his personal use during movie shoots. The trailer was delivered by the manufacturer largely empty inside. Hanks customised the interior as per his own preferences. The interior gets lots of natural wood and fabrics.

It comes with a bedroom in the rear of the trailer. There is a bathroom, a kitchenette with a dining table, a lounge area with an adjustable couch and a gas heater as well. It also gets two roof-mounted air conditioning units.