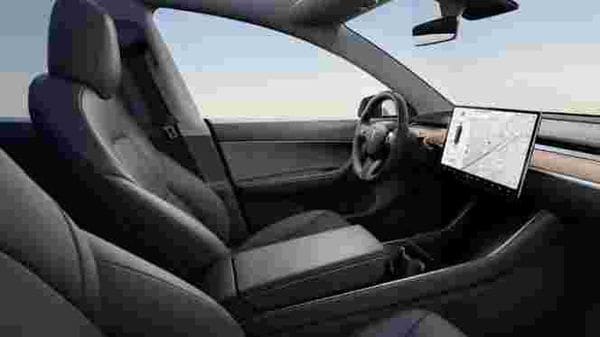 The interiors of Model Y from Tesla.

Model Y is the next big offering from Tesla and the company is fast generating a massive buzz around the electric SUV which seeks to marry large dimensions with a feature-loaded cabin and a battery-powered heart. A recent video tweeted by Tesla showcased Model Y's massive roof which is all glass, letting in the elements in all their glory. Quite obviously, Twitter erupted in unison and in awe.

Model Y is Tesla's bid to attract those who may prefer SUVs for city or highway commutes. While it has seating for five, it can also make room for seven with the option of adding a third row. But it is the mammoth glass roof that could truly usher in the feeling of space inside the vehicle and the video posted by Tesla seeks to showcase just that.

Looking up in Model Y pic.twitter.com/iAfpJ491Zz

Twitter had a celebratory reaction to the video with the overwhelming majority appearing to laud Tesla for once again leading the way. While panoramic sunroofs have become quite common in new vehicles, the all-glass roof on the Model Y takes things to a whole new level, many felt.

There were also many, however, who pointed out that the car cabin could possibly turn into a furnace with such a large glass sheet for a roof. Others said that it is almost certain that the glass will get some sort of reflective coating to keep the heat away.

Then there were few who questioned the safety aspect of the glass roof and while there is no word yet on what sort of materials have been used, it may be easier to replace a glass roof than more conventional roofs - assuming it manages to keep occupants safe during any unfortunate incident.

The Model Y is seeking to stand apart from the crowd of SUVs in the US, European and Chinese markets, and claims to have a range of 315 miles (506 kms) on a single charge. It locks horns against Ford Mustang Mach E and will also be available on lease in the US.