Home Auto Cars News Tesla Rival Lucid's First Car Has A Range Of 837 Kms, The Longest In Us

Tesla rival Lucid's first car has a range of 837 kms, the longest in US 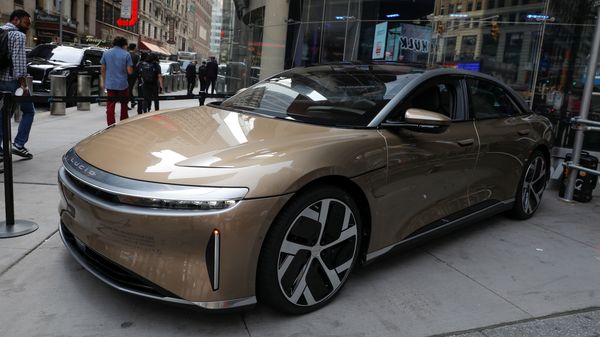 Electric vehicle maker Lucid Group says the Air Dream Edition of its debut sedan has been confirmed as the longest-range EV ever rated by the US Environmental Protection Agency. (File photo)

US-based electric carmaker Lucid has announced that its first luxury electric sedan Air Dream Edition has received an official range rating of more than 830 kms, making it the longest-range electric vehicle in the United States.

Lucid made the announcement after the EV manufacturer received official rating from the US Environmental Protection Agency, the body which certifies official range of electric vehicles in the country.

The agency rated the Lucid Air Dream Edition with an official range of 520 miles (823 kms) on single charge. It is nearly 200 kms more than its rival Tesla Model S Long Range, which has 651 kms of range.

Peter Rawlinson, CEO of Lucid Motor and also the former chief engineer of Tesla’s Model S sedan, said the official range of the Air Dream Edition is “a number I believe to be a new record for any EV." The ratings have bolstered Ludic's stocks in the share market, jumping more than eight per cent after the report came out.

The California-based EV manufacturer has been considered as a rival to Tesla because of its claims to build electric cars with world-beating ranges. The carmaker made its debut on the Nasdaq in July after completing its merger with a company backed by Wall Street dealmaker Michael Klein in a deal that valued the combined company at $24 billion.

Lucid plans to build fewer than 500 Air Dream Edition electric luxury sedan which will have the 823-kms range. The electric car is likely to cost $169,000 (roughly converted to ₹1.25 crore). The carmaker's Grand Touring version of Air sedan was also estimated to have a range of 516 miles (around 830 kms). This version of Lucid Air is expected to go into production this year and may cost around $139,000 (a little over ₹1 crore). The other variations of the vehicle all have estimated ranges that are greater than 700 kms.

Lucid will manufacture its electric cars at its facility in Casa Grande in Arizona. The EV manufacturing unit was built in less than a year and production is expected to start by the end of this year. Last month, Lucid said that it would begin deliveries of the Air Dream Edition electric luxury sedans later this year.