The longer-range Model 3 and the marginal price rise over the entry-level model could make the already popular vehicle even more lucrative.Tesla had already ramped up production in its Shanghai plant in March.
By : HT Auto Desk
| Updated on: 10 Apr 2020, 02:30 PM 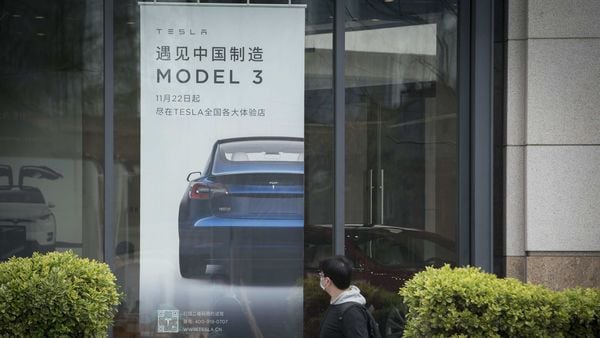 An advertisement for the Tesla Model 3 is displayed at a Tesla Inc. dealership in Shanghai.

In a clear effort to attract more buyers at a time when coronavirus pandemic has resulted in demand crashing, Tesla in China has priced its longer-range Model 3 just 13% more than the entry-level model. Before rebates, the longer-range Model 3 has been priced at 366,550 yuan (approximately 39 lakh INR).

Model 3 on sale in China is locally manufactured at Tesla's plant in Shanghai, its first outside of United States and one that was opened amid much fanfare late 2019. Bloomberg has reported that the longer-range Model 3 gets a price tag of about 339,050 yuan (approximately 36 lakh INR) after subsidies and exemption from purchase tax. This makes it far more affordable than the same model imported which costs 439,900 yuan (approximately 47 lakh INR).

The longer-range Model 3 and the marginal price rise over the entry-level model could make the already popular vehicle even more lucrative. This could be a shot in the arm for Tesla as well as the Chinese automotive industry that has taken a severe beating over the past few months due to the coronavirus pandemic.

Sales fell by nearly 70% in China as lockdowns resulted in deserted dealerships and silent factories.

Tesla enjoys a massive following in China and could provide the impetus that the world's largest car market needs.

The longer-range Model 3 claims to offer 668 kilometers on a single charge which is a substantial step up from the 450-kilometer range offered by the entry-level model of the same car. The updated Model 3 is expected to be shipped from June and could also deliver a body blow to rivals - both local and international - that are now limping back to life in the country.

It is also reported that Tesla received additional support from authorities that has helped it recover from the shutdown quicker than some of its many rivals in China. The company, therefore, ramped up production all through March. Even then, the company has to come good on the promise of meeting delivery deadlines that are a big question in several other markets where it exists.