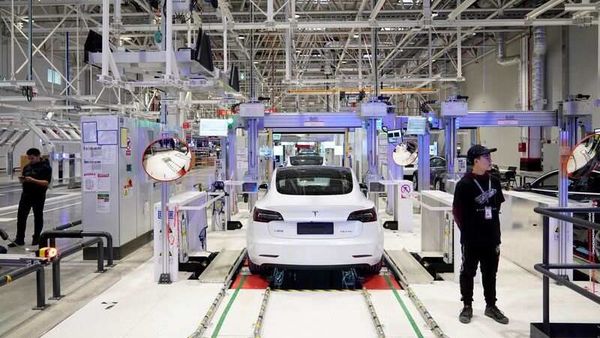 File photo: Tesla China-made Model 3 vehicles are seen during a delivery event at its factory in Shanghai, China.

Tesla Model 3 is the world's best-selling electric vehicle but this has been known for some time now. But the most affordable Tesla currently available is also one of the best-selling cars overall - a mighty impressive achievement owing to a number of factors and something that signals electric vehicles are fast making in-roads into a list long dominated by conventional engines.

According to reports, Tesla Model 3 became the 16th best-selling vehicle globally in 2020, outpacing some very formidable rivals who have been around for far longer. For a car that is powered by an electric motor and is from a company that is around 14 years old, the rise and rise of Model 3 has been nothing short of astronomical.

Tesla is one of the newest car companies in the world, at least by a long shot when compared to the likes of Toyota, Volkswagen, Mercedes and others who have been around for decades. And yet, the California-based EV maker has mounted a massive challenge and compelled traditional giants to not just sit up and take note but scurry to fight back. Tesla has a massive lead in the EV segment and is likely to hold on to it despite rival car makers coming up with their own battery-powered offerings.

A bulk of the credit for Tesla's dominance in the EV space is due to the Model 3 which was only launched in the US market in 2018. But in these past three years, the EV has managed to go from strength to strength and the decision to set up a plant in Shanghai - the first Tesla plant outside of the US - may have also helped enormously. As such, Model 3 has outpaced Nissan Leaf as the most-sold EV overall and this despite the fact that Tesla still only does business in a handful of countries.

The fact that Tesla also does not advertising and has no PR department makes the popularity of the brand and its vehicles even more significant. While there have been many who doubted Tesla in years gone by, their numbers have shrunk considerably as Tesla now looks at conquering more frontiers.