The upcoming colour option on the Tata Altroz is likely to be called Opal Blue.Tata Altroz is a direct rival to the likes of the Hyundai i20, Volkswagen Polo, Honda Jazz, and the upcoming new Maruti Suzuki Baleno.
By : HT Auto Desk
| Updated on: 23 Feb 2022, 07:12 AM 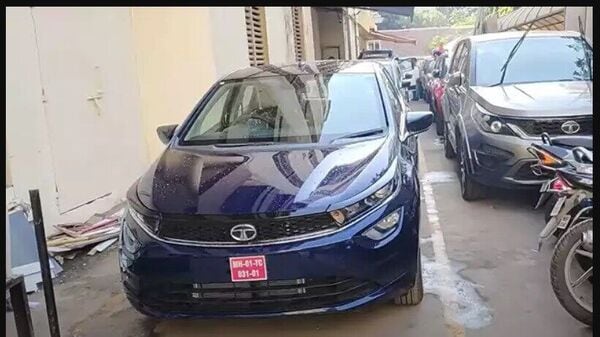 Tata Altroz was recently spotted in a new shade of blue which will launch in India soon.

Tata Motors is gearing up for the announcement of a new colour scheme on its popular Altroz hatchback. The car has been recently spotted in a new blue shade which may go on sale in the country soon. The upcoming shade is likely to be called Opal Blue. When launched, it will be sold alongside the already existing colour options including High-Street Gold, Downtown Red, Arcade Grey, Cosmo Dark, Harbour Blue, and Avenue White.

(Also Read: This Tata Nano, modified as helicopter, is ₹2-lakh ride on rent for weddings)

For the record, Cosmo Dark option is available for purchase only in the Dark Edition trims, while the High-street Gold and Harbour Blue options is available from the higher-spec XM+ variant.

Save for the exterior colour update, the rest of the car is unlikely to sport any other change. Under the hood, the car will feature the same powertrain options such as 1.2-litre petrol, a 1.2-litre turbo-petrol, and a 1.5-litre diesel engine. The transmission option is also most likely to remain the same six-speed manual gearbox.

The Tata Altroz is a direct rival to the likes of the Hyundai i20, Volkswagen Polo, Honda Jazz, and the upcoming new Maruti Suzuki Baleno.

Meanwhile, the company is also gearing up for the announcement of the new Kaziranga special edition models in the country. Recently, the Safari Kaziranga was spotted at a dealer backyard indicating that the launch is likely to take place soon. The key highlight of the new Safari Kaziranga edition will be the new exterior Grassland Beige colour option. Save for the changes to the aesthetics, most of the details are likely to remain unchanged on these special edition Tatas. (Read more details here)