This Tata Nano, modified as helicopter, is ₹2-lakh ride on rent for weddings 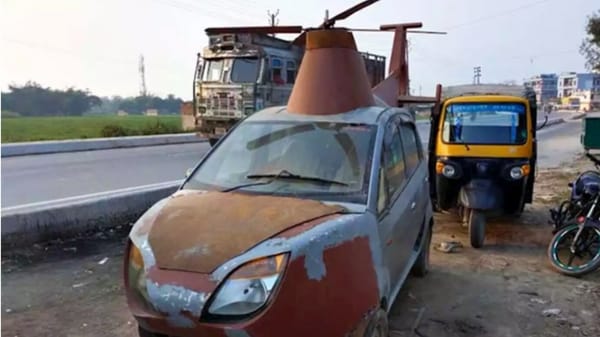 Guddu Sharma, a mechanic from Bihar, has modified an old Tata Nano car into a helicopter.

Ever thought of hiring a helicopter for a wedding ride for the bride and groom? You could be lucky if you are in Bihar, thanks to a local mechanic who modified a Tata Nano car into a helicopter and rents out for weddings. Unfortunately, the Nano helicopter can’t fly.

Guddu Sharma, a mechanic from Bagaha in Bihar, has modified his Tata Nano car which has gone viral on social media and is a hit in local areas. Some pictures of this unique Tata Nano has gone viral, in which it can be seen with wings installed on the roof, making it appear like a helicopter. It also has wings at the rear to complete its looks.

Guudu Sharma claims that he has spent around ₹2 lakh to modify the old Nano. He also plans to rent it out for wedding ceremonies at a nominal price of ₹15,000. There are reports that Guddu Sharma is already getting a lot of bookings from people who are ready to book this unique car.

'There is a lot of enthusiasm among people about booking helicopters during weddings and its demand is also very high. In such a situation, many people want that they go to their wedding by helicopter, but due to the high fares, it is not possible for everyone. That's why I have modified my Tata Nano car and given the design of the helicopter so that people can fulfill their hobby even at less cost," Said Sharma.

Sharma added a main rotor, tail boom and tail rotor using metal sheets to give the Tata Nano its helicopter look. He is currently working on to make the Nano look more attractive and ready to be rented out for weddings.

Guddu Sharma is not the first person who has come up with such creativity with old car models. In 2019, a person from Chapra, Bihar also came up with a modified Tata Nano with the design of a helicopter.

According to reports, there is a huge demand for helicopters during weddings in Bihar as a preferred choice of ride to bring home the brides. For all these people, Guddu Sharma's Nano helicopter could offer just the right choice at a nominal rate.