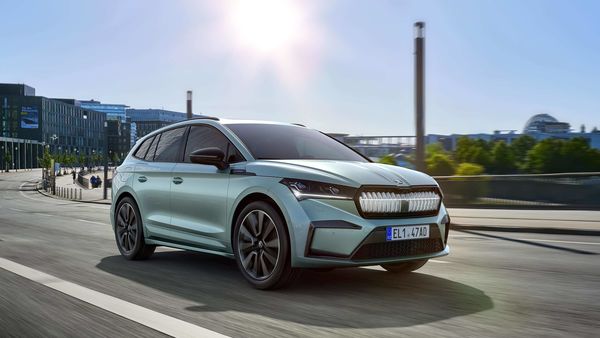 Skoda Auto has gone on a SUV-offensive in India, with at least two confirmed launches so far - the Karoq SUV and the upcoming Vision IN SUV. However, in what could be its first EV offering in India, Skoda is likely to consider bringing in its first electric SUV - Enyaq iV, which was globally unveiled a few weeks ago.

Zac Hollis, Director (Sales, Service & Marketing) of Skoda India, recently shared this update in Twitter, replying to a query about Skoda's plan to launch its mid-size SUV and the Enyaq SUV in India. Hollis wrote, "...at the moment we are still assessing the Enyaq for India."

Hi there. The launch of the new mid sized SUV is planned for the middle of next year and at the moment we are still assessing the ENYAQ for India.

Skoda unveiled the Enyaq electric SUV earlier this month. The Enyaq iV SUV is based on the Volkswagen Group's MEB modular platform . The electric SUV has a length of 4,649mm, a width of 1,879mm and a height of 1,616mm. The wheelbase measures 2,765 mm, while the boot capacity is 585 litres.

The front section and the elongated roof line create a dynamic whole and allow for maximum interior space. Enyaq iV is characterised by its LED-backlit grille, sculptural lines, with a short front and large wheels, as well as a generous height. The light-up grille has 130 LEDs. All details that contribute to the rugged SUV appearance.

The Enyaq electric SUV is available in five versions: three rear-wheel drive and two four-wheel drive. Depending on the configuration, the total power varies from 148 hp to 306 hp. On the top of the range, the RS version will be able to reach 180 kmph of maximum speed and shoot 0 to 100 in 6.2 seconds.