The production version of the Skoda Vision IN will be based on the MQB-A0 IN platform. The same platform will be used under the upcoming Volkswagen Taigun as well.
By : Prashant Singh
| Updated on: 17 Sep 2020, 06:33 PM 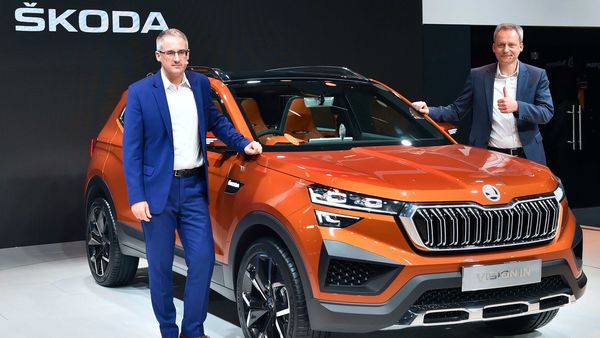 Skoda Auto India confirmed during a media session on Thursday that its Vision IN concept based SUV will be revealed in India in the first-quarter of the calendar year 2021, followed by its launch in the second quarter of the same year. The SUV will in fact launch even before the Volkswagen compact SUV 'Taigun', both of which share the same MQB-A0 IN platform.

The upcoming SUV from Skoda will be the production version of the Vision IN concept which made headlines at the Auto Expo 2020.

In terms of overall dimensions, the upcoming Skoda's SUV will span roughly 4,256 mm in length and have a wheelbase of 2,671 mm. For reference, these are measurements of the Skoda's Vision IN concept. If it is anywhere close to its concept in terms of exterior looks, the SUV will have a very cheeky and brazen design which will set it apart against the competition like the Kia Seltos, Tata Harrier and Hyundai Creta.

Mechanically, expect it to be plonked with a 1.5-litre TSI petrol engine which delivers close to 150 PS of maximum power and 250 Nm. Transmission option will include a 7-speed DSG gearbox. Skoda claims that the Vision IN concept is capable of doing the 0-100 kmph sprint in 8.7 seconds and can do a top speed of 195 kmph. So it will be safe to eoect similar performance from its road legal model.

The company has announced in the past that the production-spec Vision IN will see use of local content at above 90% and will be a made in India product under the 'India 2.0' strategy.

Skoda is yet to reveal the official name of its upcoming Vision IN based SUV, but expect more details to surface towards the end-2020.