Skoda has taken the covers off its first electric SUV Enyaq iV.

Skoda has finally taken the covers off Enyaq iV, its first electric SUV. Much was already known about this model since the manufacturer had shared most of the key technical details. Inspired by the Vision iV concept presented in March 2019 in Geneva, the Skoda Enyaq will be available in five versions, in both rear- or all-wheel drives, and the deliveries will begin next year.

The front section and the elongated roof line create a dynamic whole and allow for maximum interior space. Enyaq iV is characterised by its LED-backlit grille, sculptural lines, with a short front and large wheels, as well as a generous height. The light-up grille has 130 LEDs. All details that contribute to the rugged SUV appearance. 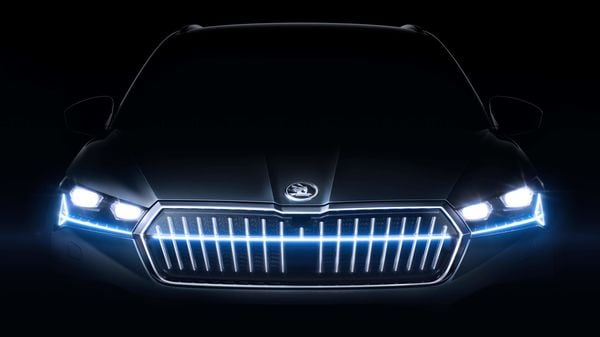 The illuminated grille of the Enyaq SUV has 130 LEDs.

The interiors benefit from the long wheelbase of the MEB platform and the presence of a flat floor. This makes the passenger compartment more spacious. The horizontally developed dashboard is characterised by the presence of the large 13-inch infotainment display. The instrumentation is digital. A head-up display can also be obtained on request. The cabin can be customised thanks to the use of natural, recycled and sustainably produced materials.

Technically, no surprise since Skoda had already lifted the veil on the characteristics of its SUV several weeks ago. The Czech electric SUV is available in five versions: three rear-wheel drive and two four-wheel drive. Depending on the configuration, the total power varies from 148 hp to 306 hp. On the top of the range, the RS version will be able to reach 180 kmph of maximum speed and shoot 0 to 100 in 6.2 seconds. Interior of the Enyaq SUV is highlighted by its large 13-inch infotainment display.

The name derives from the Irish word "enya" which means source of life. A name, therefore, which symbolises a new beginning for the Bohemian manufacturer, a clear reference to the decisive entry into the world of electric mobility. In addition, the letter “E" at the beginning of Enyaq symbolises electromobility, while the “Q" at the end is a clear reference to the brand's SUVs.