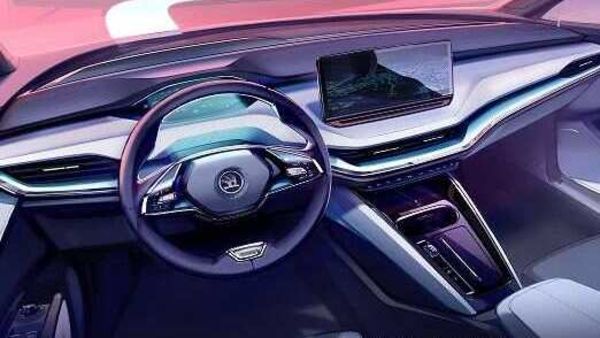 The interior design of the upcoming Skoda Enyaq electric SUV

Soda promises to break new ground in interior design with its upcoming electric SUV Enyaq iV. The Skoda Enyaq SUV will be unveiled at a world premiere in Prague in September.

Skoda made the announcement along with sharing image of the silhouette of the model that will compete with the Volkswagen ID.3. The silhouette of the new Enyaq iV gives an idea of the proportions of the new electric flagship. A short front section and an elongated roof line create a dynamic exterior while offering a generous amount of interior space.

The interior of the Czech car manufacturer’s first all-electric SUV reflects modern living environments. The Design Selections replace the previous equipment lines and feature natural, sustainably produced and recycled materials. Norbert Weber, Head of Interior Design at Skoda, explains the new interior of the Enyaq iV and its highlights in a video interview.

The Enyaq iV is the first Skoda based on the modular electrification toolkit (MEB). According to Weber, the Enyaq SUV will benefit from the MEB platform’s long wheelbase, which – in relation to the body dimensions – offers an exceptionally spacious interior. “We have used this conceptual feature to make the interior visually even airier and to create a feeling of even more space. This can be seen, for example, on the new dashboard, which is arranged over several levels." Said Weber.

The new design concept of the Enyaq iV combines spaciousness and a ‘lounge feeling’. Instead of the usual equipment lines and numerous additional options, Skoda is offering its new Design Selections in the Enyaq SUV for the first time. “These are reminiscent of modern living environments, featuring perfectly coordinating colours and materials. Additionally, we offer clearly structured option packages in various themes, with some separate options available for all models. This means we can provide customers with choices that are clear and simple yet distinctly unique," said Weber.

Listing the significant changes inside, Weber said, “The lack of a central tunnel offers numerous possibilities. At the front, we used this space for an additional storage compartment beneath the centre console, which is arranged over several levels. Thanks to the long wheelbase, rear passengers benefit from the extra space in front of the centre seat as well as the exceptionally generous legroom for the seats either side. In addition to this remarkable amount of space for passengers, the Enyaq iV also offers a boot capacity of 585 litres."

“I particularly like the decorative trim that spans the entire width of the Enyaq iV from the dashboard to the door panels, further enhancing the sense of space. Below the central display, it references the shape of the ŠKODA grille and also serves as a rest for the hand operating the touch screen. It is surrounded by a particularly soft material that extends throughout the interior and creates the feeling of sitting on the sofa at home," said Weber.

In one Design Selection, for example, the seat covers are made of 40 per cent new wool and bear the Woolmark Company’s seal. The remaining 60 per cent of the blend is polyester from recycled PET bottles. These covers have a unique feel and ensure a pleasant seating climate. Another example is the leather, which is produced in a particularly sustainable way, using an extract from olive tree leaves instead of chemicals for tanning.