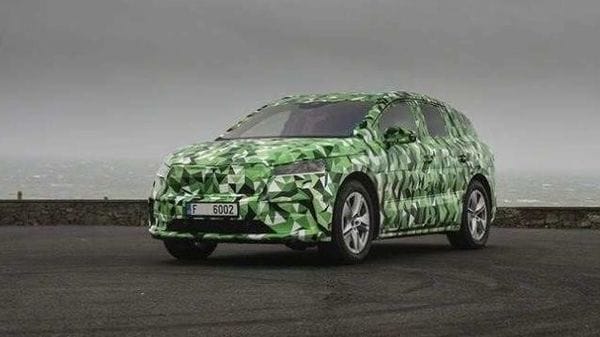 There is no official confirmation if the Enyaq EV will make way to the Indian market anytime in future.

Even in the fully camouflaged skin, the Enyaq's SUV-like proportions are fairly visible. It extends 4.65 metres in length and sits in the middle of the larger Kodiaq and smaller Karoq models.

The large size of the Enyaq has enabled Skoda to carve out loads of passenger space inside the cabin, a 585-litre boot space, and pack a battery huge enough to lend it proper real-world range figures.

Throwing more light on the Enyaq, Skoda Auto CEO Bernhard Maier, said, “The Enyaq iV marks the beginning of a new era for Skoda, it is the figurehead of our E-Mobility campaign. With it, we’re making E-Mobility Simply Clever thanks to long ranges and short charging times. At the same time, the Enyaq iV takes Skoda-typical virtues such as superior interior space, a trendsetting design and maximum functionality to a new level. Our first all-electric e-model based on Volkswagen Group’s modular electric car platform will be built at our main plant in Mladá Boleslav, at the heart of Skoda. This is an important step towards securing the future of the location and safeguarding jobs in the region."

In terms of tech-specs, it gets three different battery size options and two different drive systems. In a nutshell, the Enyaq will comprise of five model line-up.

The Enyaq 50 is an entry-level model comprising a 55 kWh battery set-up which supplies charge to a 150 PS three-phase synchronous motor mounted over at the rear axle. This version has a full-charge range of 340 kms.

Second in the list is the Enyaq 60 with a 62kWh battery and a 179 PS motor. It delivers slightly higher 387 kms of single-charge range. The top-spec, Enyaq 80 uses a 82kWh battery, 204 PS motor and is good to return 497 kms of full charge range. Other than that, the Enyaq 80X and Enyaq vRS models use the same battery kit as the Enyaq 80 but additionally gain an extra electric motor over the front axle, this provides an AWD set-up and increased power output of 266 PS for the 80X and 306 PS for the vRS models. Both of these models have been rated for 457 kms of full-charge range.

There is no official confirmation if the Enyaq EV will make way to the Indian market anytime in future.