Skoda Kushaq's variant and colour details confirmed ahead of launch

The Skoda Kushaq will come based on the India-specific MQB-A0-IN architectureThe production-spec Kushaq was officially revealed earlier this year.Kushaq from Skoda will go on sale in India in the next few weeks.
By : Prashant Singh
| Updated on: 16 Jun 2021, 12:26 PM 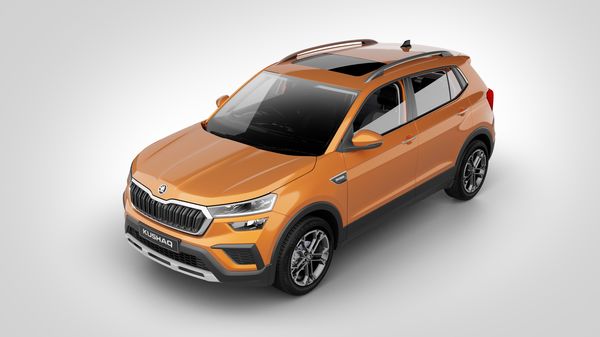 2021 Skoda Kushaq SUV will go on sale in India in the next few weeks.

Skoda India is gearing up to introduce its most prominent offering for 2021 in the form of the Kushaq SUV. It is slated to go on sale in the next few weeks. Now ahead of launch, the company has confirmed new details of the upcoming SUV. In a recent online event, the company has informed that the Kushaq will be made available in three variants - Active, Ambition and Style. The Czech carmaker also announced that there will be a choice of five colour options in the form of Candy White, Brilliant Silver, Honey Orange, Carbon Steel and Tornado Red.

The production-spec Skoda Kushaq was officially revealed earlier this year. It comes out majorly based on the concept previously showcased at the Auto Expo 2020. On the outside, the new SUV uses a range of typical Skoda design elements. There are robust-looking vertical slats positioned inside the front main grille of the SUV with a three-dimensional design effect. The grille resides inside a chrome housing and is flanked by aggressive-looking headlamps with angular LED DRLs. The headlamps of the Kushaq feature Skoda's known crystalline design pattern that gives it a distinctive appeal. The bonnet of the Kushaq adorns muscular character lines, as found on existing Skoda cars. Down below there are blacked-out elements on the bumper and a colour skid plate pattern contributing to its SUV-ish stance.

The rear section of the Kushaq has been given a two-piece LED tail lamp that adds a touch of modernity. Also, the raked rear glass and a spoiler integrated with brake lights give the SUV a modern look. Another striking exterior styling element on the Kushaq includes its wide-spaced 'SKODA' lettering in bold that sits at the rear tailgate.

The company has confirmed two engine options for Kushaq. There will be two turbocharged petrol engines in the form of 1.0L, 3-cylinder, and 1.5L, 4-cylinder. The transmission options will include a six-speed manual, a six-speed torque converter, and a seven-speed DCT that could be reserved for the top of the trims.

The car will come based on the India-specific MQB-A0-IN architecture that will also underpin the upcoming Volkswagen Taigun to be launched later this year.