Skoda Kodiaq to get ventilated seats, 8-inch screen and more. Check all features

Skoda is going to launch the 2022 Kodiaq facelift SUV in India on January 10. The premium SUV is set for a return after it was discontinued due to stricter BS 6 emission norms.
By : Sabyasachi Dasgupta
| Updated on: 04 Jan 2022, 17:26 PM 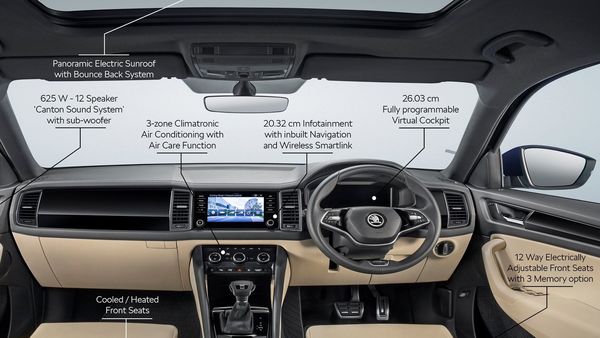 Skoda is all set to launch the Kodiaq facelift SUV in India on January 10. The SUV, which was discontinued earlier when BS 6 norms kicked in, is being brought back to the Indian market with a number of significant updates in terms of exterior styling, cabin features and engine highlight.

While the exterior design changes have already been highlighted, Skoda Auto has now shared key highlights of the interior. The Kodiaq SUV will now have a much improved cabin with several features added to it.

According to the teaser released by Skoda, the Kodiaq facelift SUV will feature a dual-tone black and beige theme. There is a two-spoke steering wheel mounted on a dashboard which has a minimalistic design. At the centre is an 8-inch touchscreen infotainment system which will come with inbuilt navigation and wireless connectivity. There is a larger 10.25-inch digital driver display behind the wheels. The automatic climate control has three zones and the doors will come with 12-speaker Canton sound system.

One of the major highlights of the cabin is the ventilated front seats which have both cooling and heating functions. The driver's seat can be electrically adjusted in 12 ways and has memory functions too.

The 2022 Kodiaq SUV will also feature a panoramic sunroof which can be electrically operated. Among other features, Kodiaq is likely to come packed with hands-free parking, ambient lighting, three-zone automatic climate control, front and rear parking sensors, nine airbags and more.

Under the hood, the 2022 Kodiaq SUV will be powered by a 2.0-litre turbo-petrol engine. It has the ability to generate maximum output of 190 hp and 320 Nm of peak torque. The engine is likely to come mated to a 7-speed DCT gearbox.

Skoda Kodiaq SUV is likely to be launched at a price of around ₹35 lakh (ex-showroom). The price of the previous model used to start at ₹33 lakh (ex-showroom). When launched, the Kodiaq facelift SUV will take on rivals like the Volkswagen Tiguan, Hyundai Tucson and Citroen C5 Aircross among others.