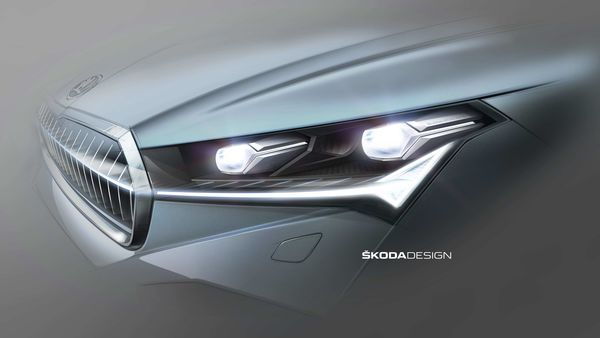 Skoda's teaser campaign for its upcoming all-electric SUV Enyaq continues, as the carmaker came up with yet another reveal. The new matrix LED headlights that will feature on the electric SUV has been teased by the company on Wednesday.

Skoda has announced the date for the global premier of its upcoming all-electric SUV Enyaq. The carmaker said the digital premier will take place on September 1.

According to Skoda, the Enyaq electric SUV will take a fresh approach to lighting design, combining technically innovative full-LED matrix headlights with an emotive design language.

Petr Nevrela, chief designer of exterior lighting at Skoda, said, “In implementing Skoda’s current design language, we already consistently developed the front headlights of the Scala and Kamiq model series and the new generation of the Octavia. In all the models we have presented over the last 18 months, the headlights are generally flatter, resulting in an even more dynamic effect. The Kamiq also adds its own twist with daytime running lights at the top. Furthermore, additional crystalline elements have been incorporated into the headlight design. With the Enyaq iV, we are continuing this trend and refining specific details, such as the new, finely-drawn daytime running lights with subtle lashes and the new hexagonal shape of the main LED modules. The new headlights and taillights further enhance the innovative character of the new Enyaq iV."

The all-electric SUV will be Skoda’s first series production vehicle based on the modular platform designed for electrification and sourced from the Volkswagen Group (MEB).

Skoda has already announced the specifications of the SUV, with no less than five versions that will comprise a single engine and rear-wheel drive- propulsion- and two electric motors and all-wheel drive, along with three powerful batteries with maximum range of up to 460 kilometres.

Earlier, Skoda revealed the interiors of the electric SUV that combines spaciousness and versatility as well as comes with smart features. The carmaker had also said that the silhouette of its new electric model will compete with the Volkswagen ID.3.